How U.S.-Saudi ties frayed under Obama 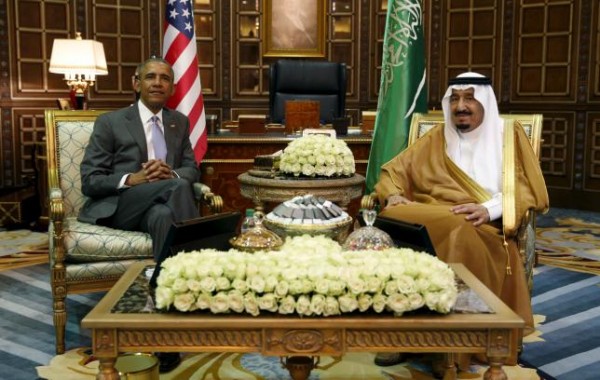 y Julian Hattem
President Obama’s chilly reception in Saudi Arabia this week was the culmination of long lingering tension between the two allies that bubbled to the surface over the course of the last year and a half.

Many Americans have distrusted the Saudi kingdom for years, given its rumored connections to Islamic extremists, harsh restrictions on women and paltry record on human rights.

But in the last year, a more serious rift emerged that is sure to outlast Obama’s time in office and will leave a challenge for his successor.
King Salman bin Abdulaziz Al Saud ascended to the throne to replace his half-brother, promptly reshuffling the cabinet; Riyadh also began an campaign against Iran-backed Houthi rebels in Yemen; and global powers closed in on completing the nuclear deal with Iran, Saudi Arabia’s regional arch-rival.

“It’s not like it was two years ago, the state of the relationship,” Senate Foreign Relations Committee Chairman Bob Corker (R-Tenn.) told The Hill this week.

In what appeared to be a break with protocol, King Salman did not meet Obama at the airport when he landed in Riyadh on Wednesday, which was broadly viewed as a snub. Salman instead dispatched the Riyadh governor and Foreign Minister Adel al-Jubair to meet Obama, even though Salman had personally greeted Gulf leaders earlier in the day.

The king’s absence at the airport was the most visible symbol of the frayed ties between the two nations, putting the White House quickly on defense.

“I think that a lot of the strain was always overblown,” Obama insisted on Thursday, while acknowledging “tactical differences” in some areas.

Those differences are not necessarily new.

“We’ve had our ups and downs over the years,” said former U.S. Ambassador to Saudi Arabia Robert Jordan.

Forty years ago, Saudi Arabia and other oil producing countries responded to the U.S.’s involvement in the Yom Kippur War with an oil embargo that left wide-reaching economic effects.

More recently, the two countries suffered fallout when scrutiny first mounted about Saudi involvement in the Sept. 11, 2001, attacks and in the years since the U.S. invaded Iraq in 2003.

Speculation about Saudi Arabia’s support for al Qaeda terrorists has risen again in recent days, circling around legislation that would allow victims of the terror attacks to sue the kingdom and 28 secret pages from a 2002 congressional investigation.

The Obama administration is opposed to the legislation, and has aligned itself with Riyadh on the issue.

But on many other issues, Obama has turned away from the Saudis and the more friendly diplomacy of past U.S. administrations.

In an interview with the Atlantic published last month, Obama referred to Saudi Arabia and other Gulf countries as “free riders” unwilling to secure chaotic zones like Libya, angering many in the kingdom.

No single act was more significant than the signing of the Iran deal, which lifted international sanctions in exchange for limits on Tehran’s ability to build a nuclear weapon.

At its heart, the stress comes down to two different interpretations of which presents the greater threat: Iran or extremist groups such as al Qaeda and the Islamic State in Iraq and Syria. Saudi Arabia has made clear that its priority is on countering Iran, leaving the U.S. out to dry in some of the terrorist fights.

Saudi Arabia sees the Iran nuclear deal as something that will only embolden Tehran and, perhaps more importantly, interpreted its signing as proof that Washington was looking beyond Riyadh to position itself in the Middle East.

Last May, in the heat of negotiations over the Iran agreement, Salman backed out of a planned Gulf Arab summit at Camp David, in what now appears to be a clear marker that the times had changed.

While some have welcomed an American government less knee-jerk in its support for the Saudis, voices in both parties have also raised deep skepticism about the turn — and the Iran deal.

“The issues that have come to the surface really have been more longstanding, and Saudi Arabia has really come to not feel like they can count on us quite as much,” said Corker. “They’ve begun to take things into their own hands that in the past they didn’t, and I just think that’s created tensions between the administration and them.”

Saudi Arabia’s new leadership has contributed to the soured relationship.

Salman “has an harder edge to him, which has probably troubled some members of the administration and Congress,” said Jordan, who is now diplomat in residence at Southern Methodist University and recently wrote a book about his time as ambassador.

The 30-year-old new deputy crown prince, Mohammad bin Salman al Saud, has been the face of the campaign in Yemen, yet is still a relative mystery in Washington.

Even once a new president enters office next year, the two countries’ interests are likely to continue diverging.

“I expert there will be an effort on both sides to kind of get things on a better track,” said Perry Cammack, an associate at the Carnegie Endorsement for International Peace and former State Department staffer.

“On some level, it might be successful,” he added. “But that doesn’t change the overall arc. I don’t think, actually, things are going back to where they were in, say, the 80s or 70s.”

“I think some of these structural things are permanent.”