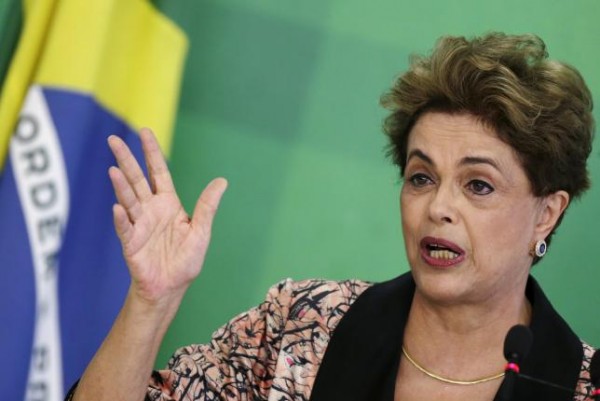 Brazil’s President Dilma Rousseff said on Tuesday she has been singled out for impeachment partly because she is a woman in a drive that is fueling hatred and intolerance in a nation increasingly divided by her possible ouster.

Rousseff, her country’s first female president, repeated that there were no legal grounds for her ouster on charges of breaking budgetary laws, as she continues to fight for her political life after the lower house of congress backed her impeachment on Sunday.

That vote, in an overwhelmingly male congress, was marked by tussles, banners and chanting not usually associated with major politicians. “Goodbye dear,” a number of congressmen shouted as they cast their vote.

Rousseff’s impeachment case now moves to the Senate where the opposition is expected to win the simple majority required to suspend her and start a trial that could last six months. If found guilty, Rousseff would become the first Brazilian leader to be impeached in more than 20 years.

The crisis has paralyzed the government as it struggles to revive the economy from its worst recession in decades, copes with an outbreak of the mosquito-borne Zika virus and scrambles to prepare to host the 2016 Rio Olympic Games.

“There has been, mixed in all of this, a large amount of prejudice against women,” Rousseff said at a news conference with international media in Brasilia. “There are attitudes toward me that there would not be with a male president.”

Brazil has more female than male voters but just 45 of the 513 deputies in the lower house are women. In the business world, a study by Corporate Women Directors International published last year found that women make up just 6.3 percent of board members at major Brazilian companies.

Rousseff stands accused of a budgetary sleight of hand employed by many elected officials in Brazil: delaying payments to state lenders in order to artificially lower the budget deficit to boost her re-election campaign in 2014.

Rousseff on Tuesday lashed out at her political opponents, noting that unlike her, many of them were facing criminal charges for corruption.

More than half the lawmakers who decided her fate on Sunday are under investigation for graft, fraud or electoral crimes, according to Congresso em Foco, a prominent watchdog in Brasilia.

Rousseff singled out for attack her vice president, Michel Temer, for conspiring against her, and speaker of the lower house Eduardo Cunha, who faces charges of corruption and money laundering. She said Cunha set the impeachment in motion out of revenge after her Workers Party refused to help him avert an ethics committee on whether he lied to Congress about having undeclared Swiss bank accounts.

“This is a attempt to have an indirect presidential election by a group of people who would otherwise never be elected,” she said, denouncing the impeachment process as a “coup.”