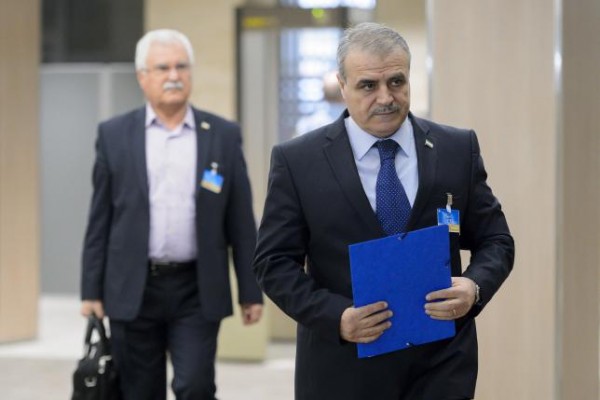 Senior Syrian opposition negotiators on Sunday urged rebels to strike back against the Syrian army, accusing it of using a cessation of hostilities to gain ground, and cast doubt over whether they would continue Geneva peace talks indefinitely.

A senior opposition figure who asked not to be quoted by name said pressure was growing for a speedy decision to leave talks.

In a internet message to fighters on the ground, chief negotiator Asaad al-Zoubi said there was a limit to how long he would negotiate if government advances continued and there was no progress on a key opposition demand for political transition without President Bashar al Assad. He gave no deadline.

“We will not stay for long negotiating.. .In the event a missile targets them (rebels), they have to retaliate with ten missiles,” said Zoubi whose mainstream opposition group has been accused by fighters of being divorced from realities on the ground.

In heightened rhetoric as the Syrian army and its allies expand operations against rebel-held territory, Zoubi, who is in Geneva, said rebels “must gain control of as many areas as possible, they must take advantage of the ceasefire as the regime has done”.

The mainstream opposition includes both political and armed opposition to Assad. It includes rebel groups such as Jaysh al-Islam and a number of Free Syrian Army rebel factions deemed moderate by the West, some of which have received military support from Assad’s foreign enemies.

“I say this response should be retaliation so that the regime does not think of attacking civilians as it escalates its attacks,” Alloush told Arabic TV al Hadath.

“I don’t think this is a call to escalate violence, it is a call for self-defense no more,” he said.

Both comments by Geneva negotiators point to the possibility of the mainstream opposition leaving peace talks.

They have also been infuriated by an idea they say United Nations envoy to Syria Staffan de Mistura had suggested to them in Geneva that Assad could stay on in power in a symbolic role. [L5N17J0GU]

“The regime is intransigent and de Mistura is clearly now tilting towards a much more ambiguous stance on a political transition without Assad,” he said.

More than 250,000 people have been killed in the five-year-old conflict.

A rival rebel group Ahrar al Sham launched a scathing attack on the opposition negotiators and the peace process saying the outcome “so far was negative and it had provided free political gains for the regime”.

Fighting near Aleppo has been escalating for two weeks, mostly to the south of the city where government forces backed by Lebanon’s Hezbollah and other militias have been waging fierce battles with rebels including the Nusra Front.

Zoubi said in the internet recording he had told de Mistura they would not be ready discuss to any other proposal other than the transfer of power from Assad to a transitional body.