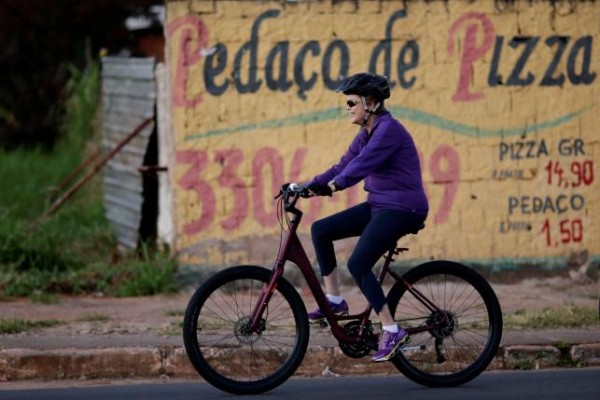 Brazil’s President Dilma Rousseff rides her bicycle near the Alvorada Palace in Brasilia, Brazil April 15, 2016. REUTERS/Ueslei Marcelino
Share:
Brazilian President Dilma Rousseff is facing possible impeachment by Congress, with the lower Chamber of Deputies expected to vote on the measure on Sunday. The effort comes amid an angry public mood over the South American nation’s worst recession in decades and a big bribery scandal at the state oil company Petrobras, yet it is not tied to either of those. AP explains what’s behind the movement to oust her, and how it could play out:

WHAT IS ROUSSEFF ACCUSED OF DOING?

Rousseff is accused of breaking fiscal laws by shifting around government funds to plug holes. Opposition parties say sleight-of-hand accounting allowed her to boost public spending to shore up support. Rousseff denies any wrongdoing, saying she didn’t do anything that was not common practice in all prior administrations. She further argues that she isn’t being accused of a crime, which should be the basis for any impeachment.

WHAT WAS THE FIRST STEP OF IMPEACHMENT?

Early this week, a special committee in the Chamber of Deputies voted 38-27 that the impeachment petition had a legal basis, sending it to the full Chamber of Deputies. With Brazil’s corruption scandals in the background, observers noted that 37 of the panel’s members face charges for a wide variety of alleged crimes. The committee included many of Rousseff’s opponents.

The Chamber of Deputies has begun debating the matter, with a vote expected on Sunday. If at least 342 of the 513 legislators, or two-thirds, vote to impeach Rousseff, the case would move to the Senate. If a simple majority of senators then votes to consider impeachment, Rousseff would have to step aside temporarily, making Vice President Michel Temer acting president. If 54 of the Senate’s 81 members then vote for impeachment, Rousseff would be forced from office and Temer would serve out her term, ending Dec. 31, 2018.

HOW DO ROUSSEFF’S SUPPORTERS AND DETRACTORS CHARACTERIZE THE SITUATION?

Government supporters call the impeachment push a coup, because Rousseff is not accused of any crime. They say Brazil’s traditional ruling class has been unnerved by the social movement under Rousseff’s Worker’s Party over more than a decade in power and is seizing the opportunity to take back power. Opponents say the administration’s maneuvering of funds was illegal and an attempt to mask problems in Latin America’s largest economy, such as huge budget gaps that have surfaced over the last year. They say impeachment can’t be considered a coup because it’s allowed in the constitution.

WHO IN CONGRESS IS PUSHING FOR IMPEACHMENT?

Leading the charge is long-time Rousseff nemesis Eduardo Cunha, the speaker of the Chamber of Deputies who himself is accused of taking bribes in the Petrobras scandal. He denies wrongdoing. But congressmen from more than 10 parties, ranging from the centrist Brazilian Social Democracy Party to the conservative Democrats, support impeachment.

WHAT DOES FORMER PRESIDENT LUIZ INACIO LULA DA SILVA HAVE TO DO WITH ALL THIS?

Rousseff asked Silva, her predecessor and mentor, to use his skills as a negotiator to help her fend off impeachment. She appointed Silva as her chief of staff, a move that still must be confirmed by Brazil’s top court. Government supporters say the appointment would help Rousseff stabilize a rocky political situation. Detractors say it’s a naked attempt to sidetrack any prosecution of Silva, who was questioned in early March in the Petrobras probe. Cabinet members can only be investigated or tried with the permission of the Supreme Court. Silva has not been charged and denies any wrongdoing.