Massive Monarch migrations. How do they know which way to go? 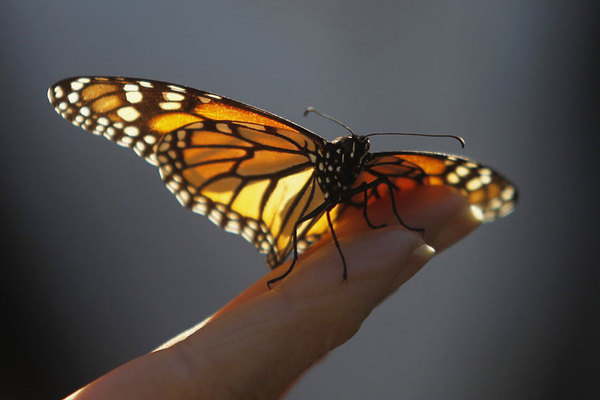 Monarch butterflies migrate thousands of miles from the northern United States and southern Canada to spend the winter in more temperate climates in southern Mexico. The insects may not have a GPS to navigate their way south, but they do have a compass of sorts.

Previous research found that the insects use the position of the sun in the sky combined with an internal clock to determine which way is south, in what’s called a time-compensated sun compass.

But scientists puzzled over how this information was integrated and turned into action inside the butterfly’s brain. So a team of researchers set out to create a model that might explain the neurological mechanism. And that model is described in a paper published Thursday in the journal Cell Reports.

“We have the pieces. They have to connect someplace,” one of the researchers, Steven Reppert, a neurobiologist at the University of Massachusetts Medical School, tells The Christian Science Monitor in a phone interview. Now, “we have an idea of how those connections should potentially occur.”

As a Monarch butterfly flies along on a sunny day, its eyes are constantly registering where the sun is in relation to the horizon. Although the sun travels east to west, the butterfly needs to be able to determine which is which at a given moment. That’s where the circadian clock comes in.

Embedded within the insect’s antennae are these biological clocks. They help the butterfly determine what time it is. So if the sun is close to the horizon, these clocks indicate whether it is rising or setting and therefore if it is in the east or west.

Then, if the sun is in the east, for example, the butterfly flies with the sun on its left to go south.

But how those two sets of data work together to create a directional adjustment in the butterflies has been unclear, and that’s where this new research comes in.

“This work provides a big step forward in thinking about how these different pieces of information that we knew had to talk to each other are likely to do that,” Marcus Kronforst, an ecologist at the University of Chicago who was not part of this study, tells the Monitor in a phone interview.

These two senses feed into the center of the butterfly’s brain, into a sort of compass. But what are the signals that enter the brain and how do they interact?

The researchers fed the data they already knew about how this whole navigation system works into their computational model. Using those parameters, they developed what might be the neural mechanism.

As the receptive fields in the eyes detect the sun’s position, an oscillating neuronal signal is sent through to the brain. Meanwhile, the circadian clock is also sending oscillations.

The rate and combination of these neuronal signals tell the brain what signal to send to the body to adjust course. It dictates how much of an angle to change and whether it should turn left or right.

And if a butterfly is blown too far away from the necessary southerly direction, they adjust in a more dramatic way.

The researchers found that if the butterflies are pushed off course past a certain angle (which changes throughout the day), they will actually rotate their bodies around in a full circle as a sort of resetting method. Interestingly, that angle is tighter to the southerly track during the morning and evening, so the researchers suggest these rotational corrections likely occur more frequently then.

This phenomenon didn’t just appear in the model, the first author of the study, Eli Shlizerman, an applied mathematics researcher at the University of Washington, tells the Monitor in a phone interview. When they tested the actual butterflies, they would see them perform similar rotations to adjust.

But that’s not all. What happens when the butterflies need to return north for the summer?

When the researchers were investigating what different arrangements of neuronal wiring might fit the data to explain how the butterflies navigate, they found just two viable options. One helps the monarchs fly southwest, and the other helps it return northeast.

And, as Dr. Kronforst explains, the butterflies don’t fly around aimlessly to find their initial direction when it is time to migrate. Instead, they set off in the right direction right away. So these two wirings likely appear somehow in the neurobiology of the monarch butterflies.

This model doesn’t explain all the mechanisms likely involved in monarch migration navigation, admits Dr. Reppert. This model just looks at the mechanism for when the sun is in clear view in the sky. But the butterflies are known to be able to use polarized light on partly cloudy days to calculate the position of the sun. And they still fly in the right direction on completely overcast days. This is likely thanks to a sort of magnetic compass also in the insect’s brain, Reppert says.

It’s still unclear how these different mechanisms work together, Reppert says, but the sun compass is likely the primary cue that the butterflies use to determine direction.

To confirm their model, the researchers will next need to dig into the biology of butterflies and see if the model matches the structures actually in their brains.

“It is really an incredible feat that these little butterflies are able to make that amazing long-distance migration,” Kronforst says. “That’s why it’s important for people to try and understand how this happens.”

This research won’t just help scientists understand monarch migrations, he adds. It also could yield clues into the navigational tools of other migratory animals too.