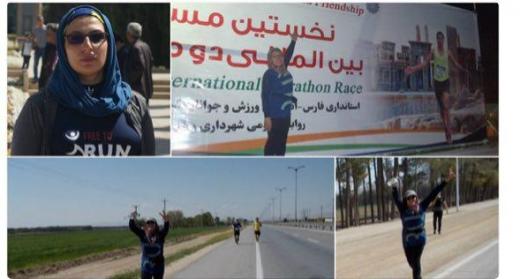 An Iranian woman defied the rules of Iran’s international marathon, which was only open to men, and ran the 26 miles from Shiraz to Persepolis on April 9.

Mahsa Torabi, an Iranian mountaineer and runner, wanted to compete in “I run Iran”, Iran’s first international marathon, which was organised by a tourism organisation with the support of Iranian authorities. But she was told that the event, set for April 9, 2016, was not open to women.

That didn’t discourage Torabi, who decided to start the course two hours before the official start to the race. She ran all 26 miles from Shiraz to the historic city of Persepolis. No one stopped her, asked her questions or even bothered her during her run.

Quickly, news of her success started circulating on Iranian social media, where she was nicknamed the “Iranian Kathrine Switzer”. Switzer was the first female runner to participate in the Boston Marathon in 1967, five years before women were officially allowed to compete.

Mixed-gender official sport events are not tolerated by Iranian authorities, but women are allowed to train with men informally. They can also run and do sports in public parks.

Two hundred runners from 30 countries participated in “I run Iran”, which the organizers said would become an annual event under the “Peace and Friendship” slogan.