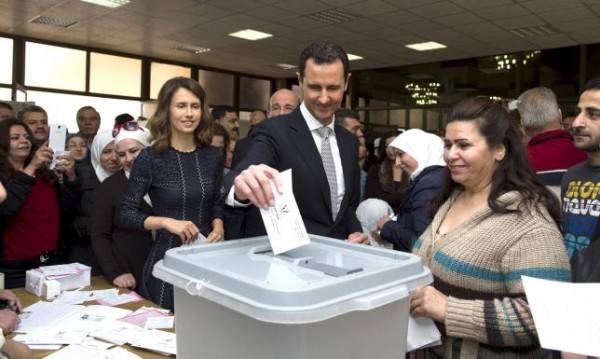 Syria’s President Bashar al-Assad (C) casts his vote next to his wife Asma (centre left) inside a polling station during parliamentary elections in Damascus, Syria, in this handout picture provided by SANA on April 13, 2016. REUTERS/SANA/Handout via Reuters
Share:

Syrians voted in a parliamentary election in government-held areas of the country on Wednesday in what voters called a show of support for President Bashar al-Assad, who is holding the poll in defiance of opponents seeking to oust him.

The election is going ahead independently of a U.N.-led peace process aimed at finding a political solution to the five-year-long war. The government says it is being held on time in line with the constitution. The opposition says the vote is illegitimate, while Britain and France dismissed it as “flimsy facade” and a “sham”.

“We are voting for the sake of the Syrian people and for the sake of Assad. Assad is already strong but these elections show that the people support him and bolster him,” said Hadi Jumaa, a 19-year-old student, as he cast his ballot at his university halls of residence in Damascus.

Dozens queued to vote at one polling station where a portrait of Assad hung on the wall. Outside, some danced.

With his wife Asma at his side as he went to vote in Damascus, a smiling Assad told state TV that terrorism had been able to destroy much of Syria’s infrastructure but not Syria’s “social structure, the national identity”. It was the first time he had voted in a parliamentary election.

The conflict has killed more than 500,000 and created millions of refugees, splintering Syria into a patchwork of areas controlled by the government, an array of rebels, a powerful Kurdish militia, and the Islamic State group. The government views all the groups fighting it as terrorists.

The government controls around one third of Syria, including the main cities of western Syria, home to most of the people who have not fled the country. The United Nations puts the number of refugees at 4.8 million.

With parliament elected every four years, it is the second parliamentary election held by the government in wartime. Assad was reelected head of state in a presidential election in 2014.

Voters are to elect 250 MPs to parliament, which has no real power in Syria’s presidential system. The state is rallying them around the slogan “Your vote strengthens your steadfastness”.

The election coincides with the start of a second round of U.N.-led peace talks in Geneva. The opposition delegation is due to meet U.N. envoy Staffan de Mistura on Wednesday. The government has said it will be ready to participate from Friday.

The diplomacy is struggling to make progress with no sign of compromise over the main issue dividing the sides: Assad’s future. The government had ruled out any discussion of the presidency ahead of the first round of talks last month.

“These elections do not mean anything,” said Asaad al-Zoubi, chief negotiator for the main opposition body, the High Negotiations Council. “They are illegitimate – theater for the sake of procrastination, theater through which the regime is trying to give itself a little legitimacy.”

Foreign states opposed to Assad have said the vote is out of line with a U.N. Security Council resolution that calls for elections at the end of an 18-month transition. His allies, notably Russia, say it is in line with the constitution.

“The decision of the regime to hold elections is a measure of how divorced it is from reality. They cannot buy back legitimacy by putting up a flimsy facade of democracy,” said a spokesperson for the British government.

France said the elections were a “sham” organized by “an oppressive regime”.

Russia, one of Assad’s main foreign allies, said however that the election was necessary to avoid a power vacuum.

“There is understanding already, that a new constitution should emerge as a result of this political process, on the basis of which new, early elections are to be held,” Russian Foreign Minister Sergei Lavrov told a news briefing.

“But before this happens, one should avoid any legal vacuum or any vacuum in the sphere of executive power.”

“We used to be forced to cast our vote in sham elections. Now, we are no longer obliged to. After all this killing they want to make a play called elections,” said Yousef Doumani, speaking from the rebel-held Eastern Ghouta area near Damascus.

But Shereen Sirmani, who fled to Damascus from the Islamic State-besieged city of Deir al-Zor four months ago, said the election was good for Syria.

“We hope they bring people together,” she said. “We support Assad and these elections are a boost for him.”