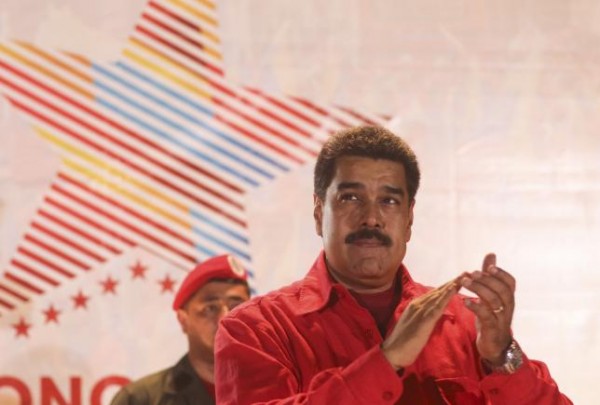 Venezuela’s President Nicolas Maduro applauds during a meeting with workers in Caracas, in this handout picture provided by Miraflores Palace on April 11, 2016. REUTERS/Miraflores Palace/Handout via Reuters
Share:
The scrapping by Venezuela’s top court of an amnesty law that could have secured the release of jailed opposition activists was very disappointing as it could have been a step towards reconciliation, a U.N. human rights spokeswoman said on Tuesday.

The OPEC member is engulfed in a bitter political standoff that has worsened since the opposition coalition won control of the National Assembly in a December vote and vowed to seek President Nicolas Maduro’s exit this year.

Maduro had vowed to veto the amnesty law, which his opponents had said could benefit high-profile government adversaries such as Leopoldo Lopez, who was arrested in 2014 on accusations that he helped spur a wave of demonstrations that killed more than 40 people.

“It’s a very, very disappointing development,” Ravina Shamdasani told a regular U.N. briefing in Geneva. “We would not like to believe that this is the end of the road. We would like to encourage all sides to explore further avenues for dialogue.”

Shamdasani said the Venezuelan government had asked the U.N. for a legal analysis of the law, and this had shown it largely conformed to international standards.

“It was a great move towards dialogue and reconciliation,” she said.

The supreme court ruled on Monday that the law violated the constitution by promoting impunity and giving amnesty for crimes that were not eligible.

The court has repeatedly backed Maduro in his disputes with the legislature following the opposition’s blowout victory in December polls that gave it a two-thirds majority of seats.

Shamdasani said the U.N. had serious concerns about the independence of the judiciary, and last year the U.N. Human Rights Committee had called for deep reform to guarantee its independence from government and other political groups.