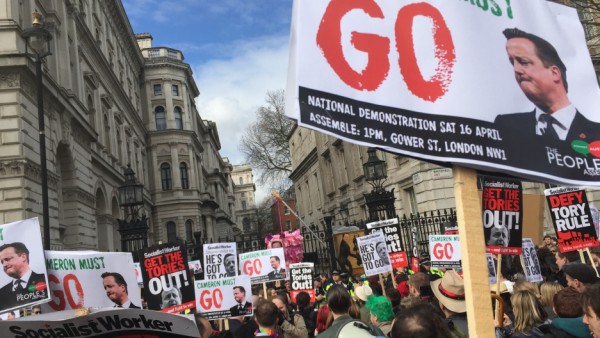 Protesters outside 10 Downing Street in London calling for the resignation of Prime Minister David Cameron
Share:

British Prime Minister David Cameron said on Saturday he should have handled scrutiny of his family’s tax arrangements better, seeking to reassert his leadership after days of negative media coverage and calls for his resignation.

After four days and four different statements over his late father’s inclusion in the “Panama Papers”, Cameron said on Thursday he once had a stake in his father’s offshore trust and had profited from it.

As hundreds of protesters from rival parties gathered outside with banners demanding his resignation, Cameron said he would publish the information used to compile his annual tax returns, past and present, because he wanted to be “completely transparent about these things”.

The protest, in which many waved banners saying “Cameron must go”, briefly blocked the street outside the venue, with delegates advised to remove their identification before leaving.

Cameron’s candid admission of fault, during which he said he had been angered at how the media had portrayed his late father, comes after a torrid period for the Conservative government.

Divided over a June 23 referendum on whether to remain in the European Union, forced to backtrack on welfare cuts and criticized for not protecting the steel industry, Cameron sought to rally party unity ahead of regional elections next month.

“We have a huge responsibility over the coming months and the coming years to settle this issue over Europe … to show the discipline and unity and purpose that is vital for government,” he said.

But the splits over Europe were in plain sight at the party’s spring forum — a key event in the party calendar at which members discuss future policy.

Outside, before the event began, rank and file Conservative Party members had to walk between lines of rival “In” and “Out” campaigners offering bags of campaign literature, with each side cheering when a delegate took one of their leaflets.

Inside, chief “In” campaigner Cameron and de-facto “Out” campaign head Boris Johnson tried in vain to avoid the debate.

“Boris and I agreed we weren’t going to talk about Europe. Did Boris keep his promise?,” Cameron said to laughs from the audience soon after Johnson referred repeatedly to the referendum in a speech at the event.

London Mayor Johnson, who opted in February to oppose Cameron and campaign for a British exit from the EU, called June 23 “independence day” during his address.

Interior minister Theresa May, making the final public speech, urged members not to let the EU debate dominate the party’s term in office.

“The referendum is a question to which the answer will define our country for years to come,” she said. “But we mustn’t allow it to define our Party. Being a Conservative is more than about being Leave or Remain.”