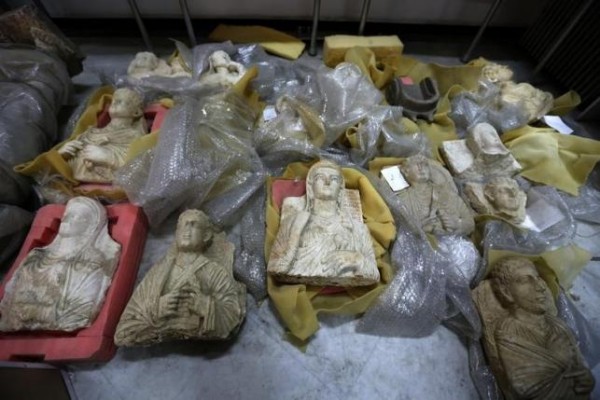 Islamic State militants in Syria and Iraq are netting between $150 million and $200 million a year from illicit trade in plundered antiquities, Russia’s ambassador to the United Nations said in a letter released on Wednesday.

“Around 100,000 cultural objects of global importance, including 4,500 archaeological sites, nine of which are included in the World Heritage List of … UNESCO, are under the control of the Islamic State … in Syria and Iraq,” Ambassador Vitaly Churkin wrote in a letter to the U.N. Security Council.

“The profit derived by the Islamists from the illicit trade in antiquities and archaeological treasures is estimated at U.S. $150-200 million per year,” he said.

The smuggling of artifacts, Churkin wrote, is organized by Islamic State’s antiquities division in the group’s equivalent of a ministry for natural resources. Only those who have a permit with a stamp from this division are permitted to excavate, remove and transport antiquities.

Some details of the group’s war spoils department were previously revealed by Reuters, which reviewed some of the documents seized by U.S. Special Operations Forces in a May 2015 raid in Syria.

But many details in Churkin’s letter appeared to be new.

The envoy from Russia, which has repeatedly accused Turkey of supporting Islamic State by purchasing oil from the group, said plundered antiquities were largely smuggled through Turkish territory.

“The main center for the smuggling of cultural heritage items is the Turkish city of Gaziantep, where the stolen goods are sold at illegal auctions and then through a network of antique shops and at the local market,” Churkin wrote.

Turkish officials were not immediately available for comment on the Russian allegations. Russian-Turkish relations have been strained ever since Turkey shot down a Russian plane near the Syrian border last November.

Churkin said jewelry, coins and other looted items are brought to the Turkish cities of Izmir, Mersin and Antalya, where criminal groups produce fake documents on their origin.

“Recently ISIL has been exploiting the potential of social media more and more frequently so as to cut out the middleman and sell artifacts directly to buyers,” he said.

EBay said it was not aware of the allegations that it was being used to sell plundered items.

“eBay has absolutely zero interest in having illicit listings of cultural or historical goods appear on our platforms,” it said. “We’re currently looking into the claims of this letter.”

“To date, we are not aware of any direct evidence of listings for items on eBay that resulted from ISIL looting or similar activity,” it added.