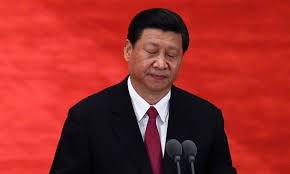 China’s Foreign Ministry on Tuesday denounced as “groundless” reports based on documents leaked from a Panama-based law firm that name relatives of current and retired Chinese politicians, including President Xi Jinping, as owning offshore companies.

Spokesman Hong Lei said he would not discuss the reports further and declined to say whether the individuals named would be investigated.

“For these groundless accusations, I have no comment,” Hong told reporters at a regularly scheduled news conference.

State media are ignoring reports on the revelations. Search results of websites and social media for the words “Panama documents” were blocked Tuesday.

The blocking was not total, however, with some searches for Panama-related news resulting in stories mentioning soccer player Lionel Messi and others featured in the documents who are not related to China.

The nationalistic tabloid Global Times published an editorial saying an unidentified “powerful force” was behind the document leak. It said the main targets were opponents of the West, especially Russian President Vladimir Putin.

“The Western media have taken control of the interpretation each time there has been such a document dump, and Washington has demonstrated particular influence in it. Information that is negative to the U.S. can always be minimized, while exposure of non-Western leaders, such as Putin, can get extra spin,” said the newspaper, published by the party’s flagship People’s Daily.

The paper made no mention of any involvement by Chinese figures.

The reports by an international coalition of media outlets working with the Washington-based International Consortium of Investigative Journalists, or ICIJ, are based on documents from the Panama-based law firm Mossack Fonseca, one of the world’s biggest creators of shell companies.

A lack of legal guarantees in China has motivated many of the country’s newly wealthy to hide their riches through complicated legal arrangements that place them beyond the reach of the authorities.

The ICIJ said Mossack Fonseca had arranged offshore companies for relatives of at least eight present or past members of the Communist Party’s Politburo Standing Committee, the apex of power in China. Among those it mentioned was Xi’s brother-in-law.

The government’s response came as no surprise, but many Chinese are likely to have heard about the ICIJ reports by finding ways around the censors or by discussing them indirectly, said Zhang Lifan, a Beijing-based independent historian and political observer.

“As usual, the first reaction of the Chinese government is to block the information from spreading,” Zhang said.

“It is difficult to prevent that, but they may be able to put the situation under control, unless someone within the system attempts to take advantage of the incident,” Zhang said.

The family lives and personal finances of Chinese leaders are taboo subjects for Chinese media and reports on them in the international press can draw angry responses from Beijing.

Previous reports by Bloomberg News and the New York Times about wealth accumulated by Xi’s family and the even-greater fortune built up by relatives of former Premier Wen Jiabao prompted China to block access to their websites within China and refuse to grant visas to their reporters to work in China.