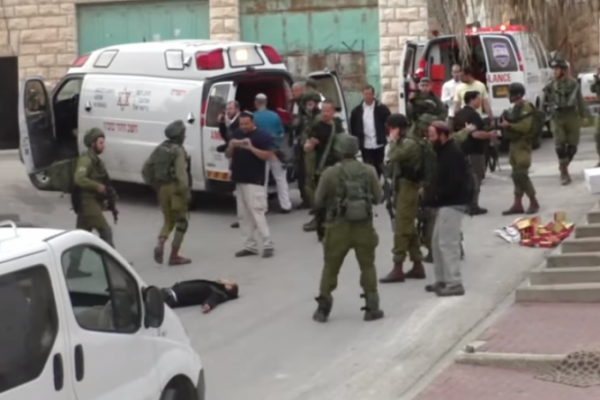 An Israeli soldier has been detained after video emerged Thursday afternoon that shows the soldier shooting a Palestinian man, who was suspected in a knife attack moments earlier, in the head as he lies injured on the street in Hebron.

The video, provided by B’Tselem, an Israeli human rights organization, shows a small crowd of Israeli soldiers and medics standing around a Palestinian man lying on the ground.

The Palestinian, Abdel Fattah al-Sharif, 21, was one of two suspects accused of stabbing an Israeli soldier at the scene moments earlier, according to the Israel Defense Forces. The second Palestinian suspect, Ramzi Qasrawi Tamimi, 21, was shot and killed at the scene.

“An Israeli soldier can be seen shooting the injured al-Sharif,” said B’Tselem in a statement released with the video.

“The incident happens in the plain view of many other soldiers and officers, who do not seem to take any notice. The soldiers and medical teams are seen in the video treating the lightly injured soldier while ignoring the two seriously injured youths.”

One of B’Tselem’s field researchers, Emad abu-Shamsiyah, recorded the video.

The video appears to show the Israeli soldier wounded in the attack being evacuated moments before the shooting.

Swift reaction in wake of video

Israeli Defense Minister Moshe Ya’alon said the shooting was against the values of the Israeli military.

“It is forbidden for a person, even when his blood is boiling, to lose his head and self-control. This incident will be dealt with in the most serious way. We have to know how to win and remain humane”

The IDF condemned the shooting, calling it a “grave breach of IDF values, conduct and standards of military operations. A military police investigation has commenced, and the soldier involved has been detained.” The commanders on the scene reported the incident before the video was released, according to the IDF.

“This is very clear evidence that Israeli soldiers are committing field executions documented by cameras against Palestinian civilians,” said al-Awad.

“The terrible pictures that were shot in Hebron today shocked me, and they need to shock every person that has a conscience and everyone who has not lost their moral judgment in the terrible reality of the past months,” said Dov Khenin, an Arab-Israeli politician from the Joint Arab List.

Prime Minister Benjamin Netanyahu also weighed in with the following statement: “What happened today in Hebron does not represent the values of the IDF. The IDF expects its soldiers to behave level-headedly and in accordance with the rules of engagement.”