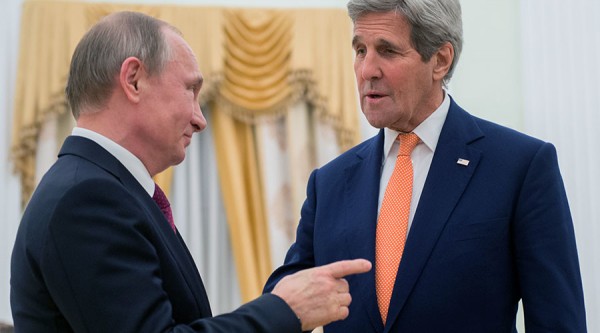 Syrian troops backed by Russian air support fought their way into the Islamic State-held city of Palmyra on Thursday, their biggest offensive yet against the jihadist caliphate, as Moscow and Washington discussed how to help to end the civil war.

U.S. Secretary of State John Kerry met President Vladimir Putin in Moscow in an atmosphere that was noticeably more amiable than past meetings, reflecting new diplomacy the two Cold War superpowers have championed in recent weeks.

Both men expressed hope for more progress toward ending the fighting.

In Geneva, where the first peace talks involving President Bashar al-Assad’s government and his foes began this month, the opposing sides were expected to sign on to a U.N. document reflecting some initial common ground.

The aim was to move toward discussing the divisive question of a political transition in Syria when the talks resume next month.

Moscow is the main ally of Assad’s government, while Washington and other Western countries have backed foes trying to overthrow him during five years of civil war that has killed 250,000 people and led to the world’s worst refugee crisis.

Both superpowers share a common enemy in Islamic State, the Sunni Muslim fighters who have declared a caliphate to rule over all Muslims from territory in Syria and Iraq.

After Russia intervened with air strikes to shore up Assad last year, Washington and Moscow have jointly sponsored a peace process that has produced the first sustained ceasefire of the war and the first negotiations involving the warring parties.

“The serious approach that we have been able to cooperate on has made a difference to the life of people in Syria and to the possibilities of making progress on peace,” Kerry said at the start of talks with Putin in Moscow.

“The people of Syria and the people of the region have as a result been able to taste and smell the possibilities of what it means to have a huge reduction of violence and receive humanitarian assistance.”

Putin, who has announced he is winding down Russia’s military involvement in Syria, even offered warm words for U.S. President Barack Obama, with whom his relations have sunk to a Cold War-era level of hostility since Washington imposed sanctions on Russia over its intervention in Ukraine in 2014.

“We understand that what we have been able to achieve on Syria has been possible only thanks to the position of the U.S. top political leadership, President Obama,” Putin said at his meeting with Kerry. “I very much hope that your visit will allow us to bring our positions closer on moving forward to solve the Syrian crisis and … on Ukraine.”

The U.S. and Russian-sponsored ceasefire between Assad’s government and his enemies does not cover Islamic State, allowing Damascus to ramp up its fight against the jihadists.

After months in which the West accused Moscow of helping Assad fight mainly against other foes, Damascus has launched a major offensive this month to take back Palmyra, which the fighters seized in their biggest Syrian offensive of last year.

The state-run news channel Ikhbariya broadcast images from just outside Palmyra on Thursday and said government fighters had taken over a hotel district in the west.

The British-based Syrian Observatory for Human Rights said the army had advanced into the hotel district just to the southwest of the city and reached a residential area, after a rapid advance the day before brought the army and its allies right up to its outskirts.

Palmyra has some of the most extensive ruins of the ancient Roman empire, some of which were dynamited by Islamic State in what the United Nations calls a war crime.

The peace talks in Geneva were due to be adjourned on Thursday until next month, with the sides expected to agree to a document drawn up by a U.N. special envoy outlining basic principles, in what one diplomat called a “baby step” forward.

The sides still have yet to address the biggest challenge: the nature of a post-war “political transition”. Opposition leaders say Assad must leave power; the government says this is not up for negotiation.

Before political talks can begin, U.N. envoy Staffan de Mistura aims to establish if there are points held in common by the different parties and announce them.

“Basic principles have been laid out. De Mistura wants to announce that all sides have agreed so that he can move on to the transition issue at the next round,” said a senior Western diplomat. “It’s a baby step, but a necessary step. It’s not a bad result.”

De Mistura said later that in the next round of talks “we have to start focusing on the political process”.

It also calls for no tolerance of acts of revenge from either side, rebuilding the Syrian army on national criteria, ensuring a democratic non-sectarian state and preserving women’s rights in fair representation.

The capture of Palmrya and further eastward advances would mark the most significant Syrian government gain against Islamic State since the start of Russia’s military intervention last September.

Islamic State has lost territory in both Iraq and Syria since last year when it captured Palmyra in Syria and Ramadi, a provincial capital in Iraq.

A soldier interviewed by Ikhbariya TV said the army and its allies would press forward beyond Palmyra.

“We say to those gunmen, we are advancing to Palmyra, and to what’s beyond Palmyra, and God willing to Raqqa, the center of the Daesh gangs,” he said, referring to Islamic State’s de facto capital in northern Syria.

The U.S.-led military coalition against Islamic State said it had also struck targets in and around Palmyra, a rare example of the U.S.-led force attacking an area also under attack by Russian-backed government forces.

Russia’s Defence Ministry said on Thursday it had carried out 41 sorties between March 20-23 in the region of Palmyra, attacking 146 “terrorist targets.”