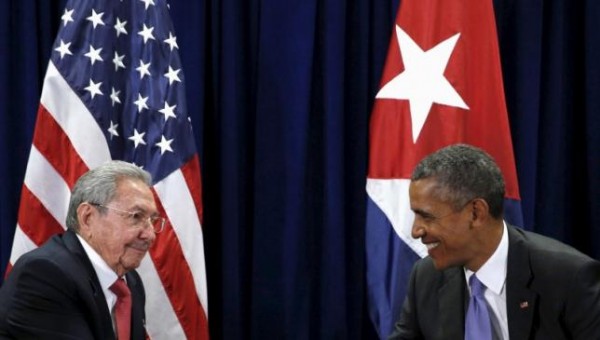 A small group of Republican lawmakers will join President Barack Obama’s historic trip to Cuba on Sunday, underlining growing divisions in the party over the future of the United States’ trade embargo against the island nation.

At least five Republicans, all known for favoring normal trade relations with Cuba, will make the trip, congressional sources and lawmakers told Reuters.

Republican congressional leaders have made opposition to President Barack Obama’s easing of the Cuban trade embargo a hallmark of their foreign policy. But an increasing number of party members, drawn by the economic benefits of scrapping the cold war-era embargo, are lining up to back the White House.

“This is the right policy. He’s done the right thing,” said Republican Senator Jeff Flake, an outspoken proponent of closer ties with Cuba who is going to Havana.

Besides Flake, Republicans making the trip include House of Representatives members Mark Sanford, Tom Emmer and Reid Ribble, as well as Senator Mark Heller, congressional sources and lawmakers said. All of the representatives confirmed their participation, except for Heller, whose office declined requests for comment. But other lawmakers confirmed his travel.

Republicans backing Obama’s policy cut against the grain of the party’s establishment thinking that seeks to avoid giving Obama any kind of policy win, either domestically or internationally. Normalizing relations with Cuba would be a significant foreign policy legacy for Obama.

Many Republicans see the embargo as contrary to their party’s pro-business tenets and believe the government should not tell citizens where they can travel.

“It’s about Americans’ freedom and embracing engagement rather than isolation as a way of changing other governments,” Sanford said in a Facebook post explaining his decision to make the trip.

At least 15 of the 54 Republicans in the Senate, mostly members from states like Kansas where agriculture is a significant industry, have publicly backed increased Cuban trade or fewer restrictions on travel.

Supporters of Obama’s policy say the total number of Republican supporters in the House and Senate reaches several dozen. Some members say they want to see how the election plays out before speaking publicly.

The U.S. embargo on Cuba, first imposed in 1960, can be lifted only via a majority vote in Congress, which is now controlled by Republicans.

Obama and Cuban President Raul Castro shocked the world in December 2014 by abruptly announcing the Cold War adversaries would move to normalize relations after more than a half-century’s estrangement.

The news drew immediate condemnation in Congress, where a bloc of mostly Republican Cuban-American lawmakers has worked to keep tight restrictions on trade and travel with Cuba for years.

Although polls show 72 percent of Americans want to abandon the embargo, the Republican party line has firmly supported the restrictions. Critics of Obama’s policy say Cuba’s government is still too repressive for the United States to ease restrictions.

A young generation of Cuban-Americans has warmed to Obama’s engagement policy, with many excited about the chance to open businesses in their homeland.

Ribble, a founder of the House Cuba Working Group who is going on the trip, represents Wisconsin, one of several states where farmers want the chance to sell to an island just 90 miles from the U.S. coast.