Palestinian shot, killed after attack on Israeli soldiers with a knife 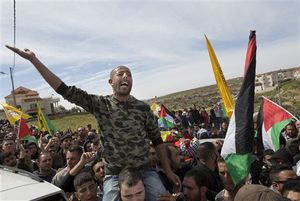 Palestinian mourners chant anti-Israel slogans while carrying the body of Mahmoud Shalan, 17, during his funeral in the West Bank village of Deir Debwan, near Ramallah, Wednesday, March 2, 2016.
Share:

The Israeli military says a Palestinian tried to attack soldiers with a knife in the West Bank before being shot and killed by Israeli forces at the scene.

The military says the Palestinian, brandishing a knife, charged the soldiers on Friday near Jerusalem at the Gush Etzion junction. The location has been the scene of many Palestinian attacks recently.

The incident comes amid six months of near-daily Palestinian attacks on Israeli civilians and security forces. Earlier in the day, the military said troops arrested two Palestinians with knives who said they were planning an attack.

Since mid-September, Palestinians have killed 28 Israelis and two Americans in stabbings, shootings and attacks using cars. At least 185 Palestinians have died by Israeli fire over the same period. Israel says most were assailants.

Palestinians held in a detention facility run by Israel’s Shin Bet intelligence agency are subject to mistreatment amounting to torture, a report based on testimonies of more than 100 ex-prisoners has concluded.

The joint report by two Israeli human rights group B’Tselem and HaMoked has documented affidavits and testimonies of dozens of Palestinians interrogated by the Israeli security agency.

The report “Backed by the System: Abuse and Torture at the Shikma Interrogation Facility”, released last February said that the mistreatment suffered by Palestinians at Shikma detention centre amounted to torture.

Testimonies were collected from 116 Palestinians detained at Shikma, which is located in Ashkelon, southern Israel from August 2013 until March 2014. The facility is controlled by the internal Shin Bet intelligence agency.

Torture was banned by the Israeli Supreme Court in 1999, but a HaMoked lawyer said that the report was evidence that the interrogators had violated the court’s ruling.