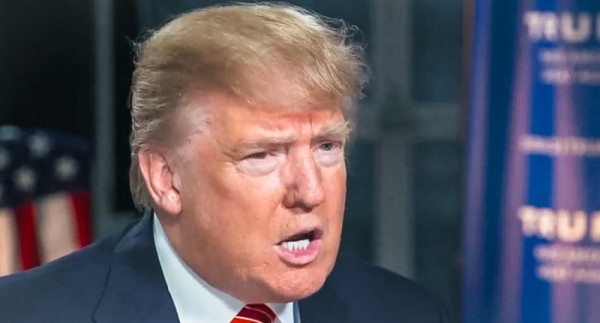 Donald Trump warned on Wednesday that his supporters would respond with “riots” if he fails to secure the nomination at July’s convention in Cleveland.

At Trump rallies, people of all ages and creeds, even some outside the continent, have continued to make their voices heard.

Far from idle chatter, Trump’s words come as escalating protests from left-wing activists, heated responses from his supporters, and increasing tensions within the GOP over his candidacy are raising fears that the convention could devolve into chaos. Cleveland is reportedly working to procure 2,000 sets of riot gear equipment for its officers.

As Trump indicated, there is a very real possibility he might lose the nomination if he wins only a plurality of delegates thanks to party rules that allow delegates to support different candidates after the initial ballot.

In that context, the message to Republicans was clear on Wednesday: Nice convention you got there, shame if something happened to it.

The same week Trump predicted a riot, he tweeted to his millions of followers that Democratic candidate Bernie Sanders needed to “be careful” or Trump would direct supporters to disrupt Sanders events. That tweet came in response to an unsupported claim that the Vermont senator had personally sent his voters to protest Trump events.

Trump’s candidacy is all about shattering political norms, but if there’s one bedrock principle of American democracy universally shared by elected officials it’s that violence has no place anywhere near the political process.

Not so for Trump.

If the front-runner is concerned that his supporters would engage in violence regardless of whether he would “lead it,” then he’s done next to nothing to discourage them and said plenty to indicate he’ll have their backs if they rough up political enemies.

After candidates accused Trump of inciting supporters last week, following an unprovoked assault by a Trump fan in North Carolina and clashes between protesters and supporters in Chicago, Trump responded by ratcheting up his rhetoric further.

In recent days, Trump suggested he may pay legal bills for the man arrested in North Carolina, who also threatened to murder the protester he struck, sending a clear message to Trump backers that the behavior was fair game. In doing so, he made good on a call for supporters to “knock the crap out of [protesters]” at a February event while promising to cover their legal costs.

The sheriff in the area where Trump held his North Carolina event investigated whether Trump was responsible for violence at the rally, but ultimately decided not to pursue the case.

He has argued that police aren’t hard enough on protesters and lamented the lack of “consequences” for interrupting his events, even telling an audiences that in old times protesters were “carried out on a stretcher.”

“Riots aren’t necessarily a bad thing if it means it’s because it’s sitting there and fighting the fact that our establishment Republican party has gone corrupt and decided to ignore the voice of the people,” Trump supporter Scottie Neil Hughes told CNN Wednesday afternoon.

She clarified later in the interview that Trump backers wouldn’t “resort to violence,” but would make sure they “can’t be ignored.”

At his Tuesday night press conference in Miami, Trump made a point to praise campaign manager Corey Lewandoski, who currently faces a criminal complaint from reporter Michelle Fields, who accuses him of manhandling her after she asked Trump a question. A Washington Post reporter confirmed her account and audio and video are consistent with their story, although not conclusive. Lewandoski has called Fields “delusional.”

The campaign also revoked the credentials of a Politico reporter for the event after the outlet published a story detailing allegations from Lewandoski’s former coworkers that he used profanity and violent language towards women.

A spokeswoman for Trump did not immediately respond to an e-mail requesting comment on Hughes’ interview, and asking for further clarification on whether Trump would discourage supporters from rioting in response to a convention loss.