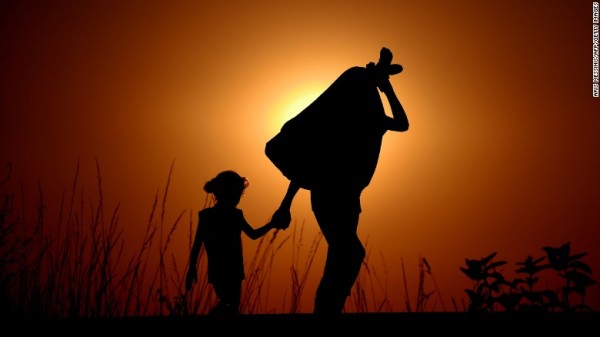 Syrian refugees walk the rail as they cross from from Serbia to Hungary
Share:
European Union leaders welcomed Turkey’s offer on Monday to take back all migrants who cross into Europe from its soil and agreed in principle to Ankara’s demands for more money, faster EU membership talks and quicker visa-free travel in return.

However, key details remained to be worked out and the 28 leaders ordered more work by officials with a view to reaching an ambitious package deal with Turkey at their next scheduled summit, on March 17-18.

German Chancellor Angela Merkel and British Prime Minister David Cameron among others hailed the surprise Turkish proposal at an emergency summit in Brussels as a potential breakthrough in Europe’s politically toxic migration crisis.

More than a million people fleeing war and poverty in the Middle East and beyond have flooded into the EU since early 2015, most making the perilous sea crossing from Turkey to Greece, then heading north through the Balkans to Germany.

Turkish Prime Minister Ahmet Davutoglu told EU leaders that Ankara was willing to take back all migrants who enter Europe from Turkey in future, including Syrian refugees, as well as those intercepted in its territorial waters.

“With this game-changing position in fact our objective is to discourage illegal migration, to prevent human smugglers, to help people who want to come to Europe through encouraging legal migration in a disciplined and regular manner,” he told a news conference after the summit.

In exchange for stopping the influx, he demanded doubling EU funding through 2018 to help Syrian refugees stay in Turkey and a commitment to take in one Syrian refugee directly from Turkey for each one returned from Greece’s Aegean islands, according to a document seen by Reuters.

The EU leaders agreed to the earlier target date for visa-free travel provided Ankara meets all the conditions including changing its visa policy towards Islamic states and introducing harder-to-fake biometric passports.

They left open how much additional aid they would provide for refugees in Turkey and made only a vague reference to preparing for a decision on opening more areas of membership talks – a particularly sensitive issue for Cyprus.

European Council President Donald Tusk, who chaired the summit, said the outcome would show migrants that there was no longer a path into Europe for people seeking a better life.

“The days of irregular migration to Europe are over,” he told a joint news conference with Davutoglu.

Merkel, who requested the special summit to show results before regional elections in Germany next Sunday, said: “The Turkish proposal is a breakthrough, if it is implemented, to break the chain from getting into a boat to settling in Europe.”

Desperate to end the influx of Syrians, Iraqis, Afghans and others, EU leaders brushed off warnings from the U.N. High Commissioner for Refugees that the EU should not shut its doors and should be willing to take in hundreds of thousands more refugees from Turkey.

Davutoglu said the summit showed how indispensable Turkey was for Europe, and Europe for Turkey.

At a preparatory meeting with Merkel and Rutte on Sunday night, he demanded double the 3 billion euros ($3.29 billion) earmarked so far to support Syrian refugees in Turkey.

Diplomats said Merkel and Rutte pressed hard for a deal on the Turkish plan but met resistance from central European states opposed to taking refugee quotas, as well as from Greece and Cyprus which have conditions for the Turkish accession talks.

Three days after the Turkish government seized the best-selling opposition newspaper Zaman, the leaders said they had discussed the situation of the media in Turkey with Davutoglu.

Italian Prime Minister Matteo Renzi said he had insisted on a reference to media freedom in the final statement.

Polish Prime Minister Beata Szydlo, one of several central European leaders who has resisted pressure to accept a quota of refugees, said the Turkish proposal, if honored and implemented, would be a big step toward solving the migrant crisis.

The EU leaders pledged to help Greece cope with a backlog of migrants stranded on its soil and welcomed NATO naval back-up in the Aegean Sea to help stop people smugglers.

Merkel refused to endorse border closures by Austria and Balkan neighbors that have stranded over 30,000 migrants in Greece, but the statement noted: “Irregular flows of migrants along the Western Balkans route have now come to an end.”

The German leader, facing a possible political backlash in three regional polls over her welcoming of the refugees, said the question of Turkish EU membership was “not on the agenda today” but strategic cooperation with Ankara was in Europe’s vital geopolitical interests.

Greek Prime Minister Alexis Tsipras said the bloc must speed up the process of relocating asylum seekers from Greece to other EU countries as promised last September. EU states have so far taken in only a few hundred of a promised 160,000 people and central European countries have rejected the whole principle.

NATO Secretary-General Jens Stoltenberg said the alliance had begun patrols in the Aegean to support efforts to locate migrant boats, overcoming territorial sensitivities in Greece and Turkey to patrol in the waters of both NATO states.

“NATO is starting activities in territorial waters today,” he told a joint news conference in Brussels with Davutoglu.

“We are expanding our cooperation with the EU’s border agency, Frontex, and we are expanding the number of ships in our deployment,” he said, adding that France and Britain had agreed to send ships to the Aegean.

Germany is leading the NATO mission that was agreed on Feb. 11, which also includes ships from Canada, Turkey and Greece. Until now, ships had been in international waters.

Britain’s Cameron said he was sending a naval force to the Aegean to join the NATO force even though Britain is outside the Schengen zone of passport-free travel and has refused to take any share of the migrants from Europe.

While Cameron stressed Britain would take no part in any common EU asylum policy, further migrant chaos could damage his efforts to win a June referendum and keep Britain in the EU.