US primaries: Everything you need to know about Super Tuesday 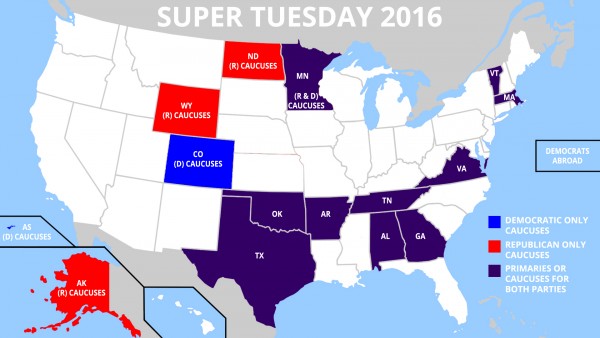 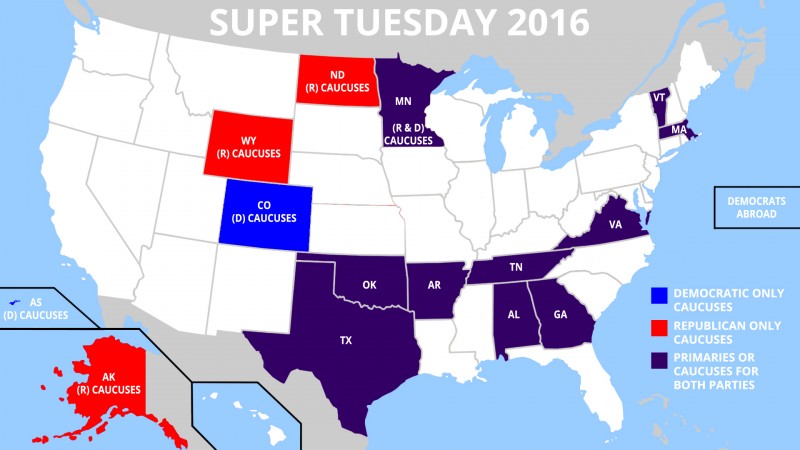 Which states are voting on Super Tuesday?

Alabama, Arkansas, Georgia, Massachusetts, Minnesota, Oklahoma, Tennessee, Texas, Vermont and Virginia will hold contests for both Republicans and Democrats. Republicans in Alaska will hold caucuses. Democrats in Colorado will hold their caucuses as well. Finally, Democrats in American Samoa are also holding their nominating contest.

When do polls close on Super Tuesday?

Voting occurs throughout the day, but polls will close at different times. Polls in Alabama, Georgia, Vermont and Virginia close at 7 p.m. (all times Eastern). Massachusetts, Oklahoma and Tennessee close their polls at 8 p.m. Most Texas polls close at 8, but a few in the state’s western region will close an hour later. Arkansas’ polls close at 8:30 p.m. Minnesota’s caucuses begin at 8. Alaska’s caucuses close around midnight.

What is the “SEC Primary”?

The “SEC Primary” is a nickname for Super Tuesday and is an ode to the Southeastern Conference, an athletic conference that includes universities in many of the Southern states holding their contests on Tuesday. The heavy concentration of Southern states in Tuesday’s primaries—Alabama, Arkansas, Georgia, Tennessee and Texas—gives a regional flavor to the voting, hence the alternate name.

How many delegates are at stake on Super Tuesday?

661 Republican delegates will be allocated, based on Super Tuesday, and 865 delegates for Democrats.

How are Super Tuesday delegates distributed?

Under party rules, no state holding its primary before March 15 can do a winner-take-all allocation of delegates, meaning that all Super Tuesday states will divide up their delegates in some way. In some states, that’s close to directly proportional to voter results, whereas others have a “winner-take-most” allocation structure or minimum vote thresholds for scoring delegates.

Why does Super Tuesday exist?

The concept originated in 1988 for two main reasons: the consolidation of voters and organization of campaigns. Southern Democrats wanted to highlight the electoral significance of their region by grouping states on a single day of voting. The arrangement also helps make the party primaries less parochial by forcing candidates to campaign nationwide.

In 2012, Mitt Romney took a commanding lead in delegates and tried to declare the race over; in 2008, Barack Obama and Hillary Clinton each declared victory after a close and chaotic finish.

How is Super Tuesday different from other primary days?

No other primary day has as many delegates grouped at once, and thus no other day gives a single candidate as much of a chance to declare a sense of certainty about his or her position. The less local the race becomes, the more serious the contenders are as national candidates. Seven states will vote the following weekend, but starting on March 7, votes and delegates trickle in. Super Tuesday will therefore give the race clarity in a way no other single day can.

Will any candidates drop out afterward?

Hanging on by a thread, Ohio Gov. John Kasich and retired neurosurgeon Ben Carson could face serious losses across the country and be pressured by party officials to give up hope and help Rubio and Cruz take it to Trump. The longer the two long shots stay in the race, the harder it is to make up the gap between Trump’s delegate total and everyone else’s.

When are the next primaries after Super Tuesday?

On Saturday, March 5, Democrats and Republicans vote in the Kansas caucuses and Louisiana primaries. Republicans will also vote in Kentucky and Maine, while Democrats will vote in Nebraska. On Sunday, Democrats go to the polls in Maine.