Nobel Peace Prize: Number of nominations surge but Trump has little if any chance 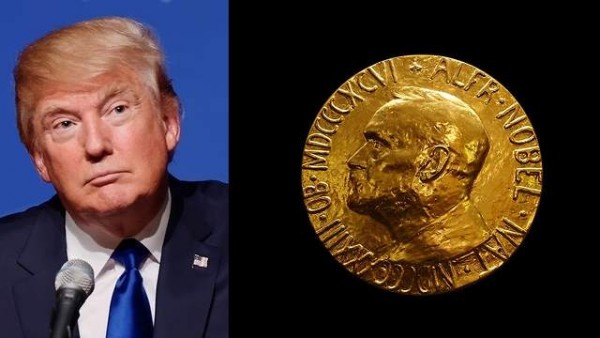 Donald Trump nominated for: “his vigorous peace through strength ideology, used as a threat weapon of deterrence against radical Islam, ISIS, nuclear Iran and Communist China,” according to a copy of the nomination letter obtained by the Peace Research Institute in Oslo, Norway. According to PRIO, Trump was nominated by an American. Apparently even Trump thought this was a joke
Share:

The number of nominations for the Nobel Peace Prize surged to a new record for 2016, a guardian of the award said on Tuesday, with contenders ranging from peace negotiators in Colombia to U.S. presidential candidate Donald Trump.

“It came as a pleasant surprise,” Olav Njoelstad, director of the Norwegian Nobel Institute, told Reuters of the leap in the number of nominees to 376 from a previous high of 278 in 2014.

Thousands of people, from members of every parliament worldwide to all former winners, are eligible to make nominations. Nomination does not imply Nobel endorsement.

Norwegian Nobel experts who track publicly announced nominations reckon those with a chance include former U.S. spy agency contractor Edward Snowden and Colombia’s government and FARC rebel group – if they succeed in peace talks to end five decades of war. Trump, frontrunner in the U.S. Republican presidential primaries, had little if any chance of success.

Njoelstad said there was no clear pattern to explain the surge in nominations from around the world.

The deadline for nominations was Feb. 1 and the winner of the prize, worth $930,000, will be announced in October.

“There are of course a number of very serious conflicts and troublespots and problems like the refugee crisis which, it’s easy to imagine, will prompt more nominations,” Njoelstad said.

The secretive five-member committee had its first meeting of 2016 on Monday.

Greek islanders helping Syrian refugees crossing the Mediterranean were also among those proposed.

Last year’s award was a surprise, to a coalition of Tunisian democracy campaigners, the National Dialogue Quartet.