Israeli torture of Palestinian children in the prison in outdoor cages, even during the winter is reportedly a common practice
Share: 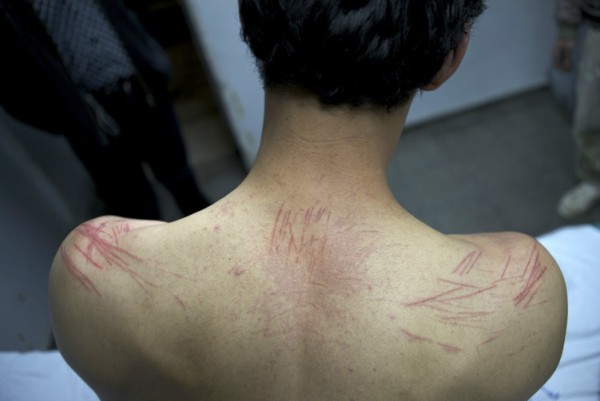 Dozens of Palestinian detainees at an Israeli detention facility have been subjected to mistreatment, and in some cases torture, two Israeli human rights groups alleged on Wednesday.

The report was released at a time of heightened violence. In new bloodshed Wednesday, Israeli troops accidentally shot and killed a fellow soldier as they thwarted a Palestinian stabber in the West Bank, the military said.

The report by the B’Tselem and HaMoked rights groups presented accounts by 116 Palestinian detainees on conditions at the Shikma interrogation facility, run by the Israeli Shin Bet internal security agency.

It said detainees have been incarcerated in small, rank cells, often in isolation. Palestinian detainees told the Israeli rights groups that they were at times exposed to extreme heat or cold, bound to a chair and denied access to a shower for days or weeks. The detainees said they were shouted at and spat on, deprived of sleep and provided little, substandard food, the report found.

Israeli agencies are bound by a Supreme Court’s 1999 prohibition on torture and work under legal supervision. Far more serious abuses of detainees are rampant in other countries across the region.

The report comes as Israel struggles to cope with months of near-daily Palestinian attacks on civilians and security forces.

In Wednesday’s incident, the army said a Palestinian assailant attempted to stab a soldier at the Gush Etzion junction, a spot near Jerusalem that has experienced numerous attacks in recent months. It said nearby soldiers opened fire, hitting the soldier and the alleged attacker. The soldier, identified as Capt. Eliav Gelman, later died of his wounds, while the assailant was wounded and taken to a hospital.

Since September, a total of 28 people have been killed on the Israeli side in a series of Palestinian stabbings, shootings and car-ramming attacks, while at least 166 Palestinians have been killed, including 119 people said by Israel to be attackers.

Israeli leaders have said the Palestinian attacks are fueled by incitement by Palestinian leaders and social media. The Palestinians say the violence is the result of nearly five decades of Israeli military rule, years of failed peace efforts and lack of hope among Palestinian youth.

The rights groups’ report was based on affidavits and personal accounts from Palestinians held for security reasons at the facility between August 2013 and March 2014. The prisoners interviewed spent a maximum of 58 days in detention.

In their report, the groups said at least 14 of the Palestinian detainees endured torture during interrogations by Palestinian Authority security services before being arrested by Israeli security forces.

Daniel Shenhar, a HaMoked lawyer, said the report shows interrogators have violated the Supreme Court ruling with the use of intentional sleep deprivation and prolonged stress positions.

The Shin Bet called the report “twisted.” It said interrogations are conducted according to law in order to prevent attacks and “activities that damage the security of the country.”