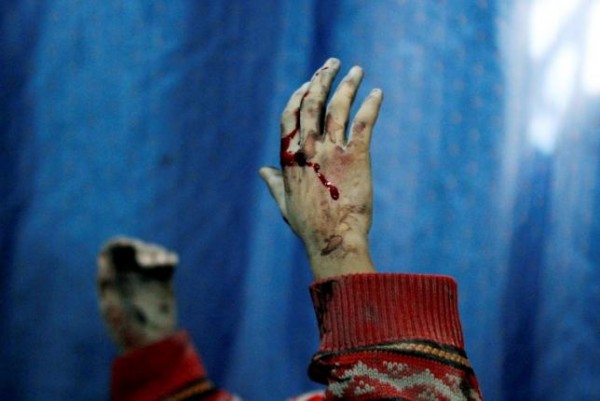 Blood covers the hands of an injured boy lying in a field hospital after what activists said were air strikes by forces loyal to Syria’s President Bashar al-Assad in the Douma neighborhood of Damascus February 6, 2015. REUTERS/ Mohammed Badra
Share:

The United States and Russia announced plans for a “cessation of hostilities” in Syria that would take effect on Saturday but exclude groups such as Islamic State and al Qaeda’s Nusra Front, a loophole Syrian rebels immediately highlighted as a problem.

Monday’s agreement, described by a U.N. spokesman as “a first step towards a more durable ceasefire,” is the fruit of intensive diplomacy between Washington and Moscow, which back opposing sides in the 5-year-old civil war that has killed more than 250,000 people.

Presidents Barack Obama and Vladimir Putin discussed the accord by phone, and the Kremlin leader said it could “radically transform the crisis situation in Syria.” The White House said it could help advance talks on bringing about political change in Syria.

To succeed, the deal will require both countries to persuade their allies on the ground to comply. Fighting and air strikes continued on Monday, according to a British-based monitoring group.

The plan allows the Syrian army and allied forces, as well as Syrian opposition fighters, to respond with “proportionate use of force” in self-defense. It leaves a significant loophole by allowing further attacks, including air strikes, against Islamic State, Nusra and other militant groups.

Bashar al-Zoubi, head of the political office of the Yarmouk Army, part of the rebel Free Syrian Army, said that would provide cover for Syrian President Bashar al-Assad and his Russian allies to keep attacking opposition-held territory where rebel and militant factions are tightly packed.

“Russia and the regime will target the areas of the revolutionaries on the pretext of the Nusra Front’s presence, and you know how mixed those areas are, and if this happens, the truce will collapse,” he said.

Since intervening with air strikes in support of Assad in September, Russia has helped pave the way for significant advances by government forces in a conflict that has drawn in a host of world and regional powers.

The Syrian army is backed by Moscow, Iran and fighters from Lebanon’s Hezbollah. Ranged against them are rebels supported by the United States, Turkey and Saudi Arabia.

A U.S.-Russian statement said the two countries and others would work together to delineate the territory held by Islamic State, Nusra Front and the other militant groups excluded from the truce.

But rebel officials said it was impossible to pinpoint positions held by Nusra.

“For us, al-Nusra is a problematic point, because al-Nusra is not only present in Idlib, but also in Aleppo, in Damascus and in the south. The critical issue here is that civilians or the Free Syrian Army could be targeted under the pretext of targeting al-Nusra,” said a senior opposition figure, Khaled Khoja.

He said the cessation would be for an initial two weeks and “could be extended indefinitely if the parties commit to it.”

Assad said on Saturday he was ready for a ceasefire, on condition that opposition forces he describes as terrorists did not use a lull in fighting to their advantage, and that countries backing insurgents halted support for them.

In a sign of confidence, reflecting his growing momentum on the battlefield, Assad on Monday called a parliamentary election for April 13. The timing was not a surprise as elections are held every four years and the last one was in 2012.

A U.N. Security Council resolution in December called for elections within 18 months under a new constitution, and administered by the United Nations.

The U.S.-Russian plan got a cautious and hedged response from Riad Hijab, chief coordinator of the main Western-backed Syrian opposition, who said he did not expect the governments of Syria, Iran or Russia to comply with it.

Hijab said the Saudi-backed High Negotiations Committee, of which he is president, would accept a truce if Syria and its backers halted all sieges, permitted aid deliveries, released all detainees and ended bombardments and attacks on civilians.

“The HNC is committed to the success of the international efforts dedicated to ending Syrian bloodshed … but we are also capable of addressing the regime in a language it understands,” he said, saying a formal HNC response would come later.

De Mistura told Reuters the cessation accord could allow a resumption of negotiations. “We can now relaunch very soon the political process which is needed to end this conflict,” he said.

U.N. Deputy Secretary-General Jan Eliasson said he was “not pessimistic.”

Under the terms of the cessation, parties would indicate their agreement to the United States and Russia by noon on Friday Damascus time (1000 GMT), and the truce would take effect at midnight, the two countries said.

The agreement does not spell out in detail how the truce will be monitored, let alone enforced. While the United States and Russia will establish a communication “hotline” and encourage others to share information about violations, they have yet to make explicit how they plan to do so.

U.S. Secretary of State John Kerry cited “significant challenges ahead.” He urged all sides to accept the deal, which he said could cut violence and help get aid to besieged areas.

Israeli Defense Minister Moshe Yaalon, in a speech aboard a U.S. Navy ship visiting Israel, said: “It is difficult to see a stable ceasefire in actuality, with all players agreeing to it.”

Islamic State attacked the Syrian government’s main supply route from Damascus to the northern city of Aleppo, a day after the group targeted Damascus and Homs in some of the bloodiest car bomb attacks of the war.

A rebel fighting government forces and Kurdish militia in the Aleppo area said there was no sign of a let-up. “The battles are in full force,” he told Reuters.

“Indeed, success of this initiative – including widespread humanitarian relief for Syrian civilians – requires good faith and decency by three parties who have shown little or none during the duration of this crisis,” Hof said. “Let’s hope they change their spots.”