Violence rages in Syria as US, Russia reach provisional deal on ceasefire 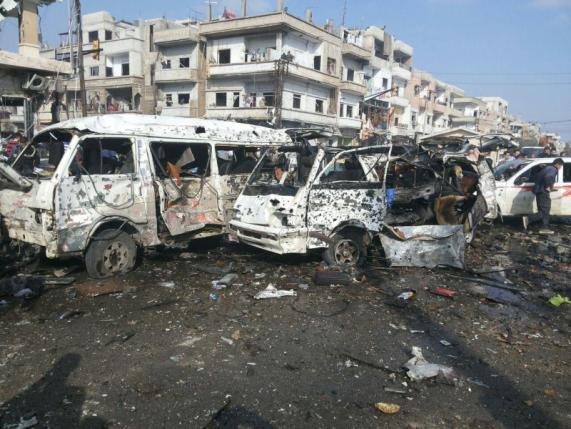 Damaged buses are seen at the site of two bomb blasts in the government-controlled city of Homs, Syria, in this handout picture provided by SANA on February 21, 2016. REUTERS/SANA/Handout via Reuters
Share:

U.S. Secretary of State John Kerry said on Sunday he and his Russian counterpart, Sergei Lavrov, had reached a provisional agreement on terms of a cessation of hostilities in Syria and the sides were closer to a ceasefire than ever before.

Russian air strikes launched in September against rebels fighting President Bashar al-Assad have exacerbated suffering and destruction in Syria, where a five-year-old civil war has killed more than a quarter of a million people.

Assad said on Saturday he was ready for a ceasefire on condition “terrorists” did not use a lull in fighting to their advantage and that countries backing the insurgents stopped supporting them.

The Syrian opposition had earlier said it had agreed to the “possibility” of a temporary truce, provided there were guarantees Damascus’s allies, including Russia, would cease fire, sieges were lifted and aid deliveries were allowed country-wide.

“We have reached a provisional agreement in principle on the terms of a cessation of hostilities that could begin in the coming days,” Kerry told a news conference in Amman with Jordanian Foreign Minister Nasser Judeh.

“The modalities for a cessation of hostilities are now being completed. In fact, we are closer to a ceasefire today than we have been,” said Kerry, who was also to meet King Abdullah.

He declined to go into detail about the unresolved issues, saying the two sides were “filling out the details” of the agreement. And he indicated issues remained to be resolved and he did not expect any immediate change on the ground.

He repeated the U.S. position that Assad had to step down. “With Assad there, this war cannot and will not end,” he said.

Assad’s fate has been one of the main points of difference between Washington and Russia, the Syrian leader’s main international backer. Russia recently has begun to say Syrians should decide on whether Assad should stay or not, but it continues to support Damascus with air strikes.

OBAMA AND PUTIN TO TALK

Kerry said he had spoken to Lavrov on several occasions, including earlier on Sunday, and that he anticipated U.S. President Barack Obama and Russian President Vladimir Putin would talk in the coming days to complete the provisional agreement in principle.

The Russian Foreign Ministry confirmed Lavrov and Kerry had spoken by phone on Sunday about conditions for a ceasefire. It said the discussions were on conditions that would exclude operations against organizations “recognized as terrorist by U.N. Security Council”.

Those groups include Islamic State and the al Qaeda-linked Nusra Front.

Despite the provisional agreement, Kerry did not see an imminent change in fighting on the ground.

“I do not believe that in the next few days, during which time we try to bring this into effect, there is somehow going to be a tipping point with respect to what is happening on the ground … The opposition has made clear their determination to fight back,” he said.

The car bombings on Sunday in Homs, in which at least 100 were also wounded, were among the deadliest in the city in five years of fighting, the Syrian Observatory said.

Russia’s RIA news agency said on Sunday that Russian Defence Minister Sergei Shoigu had arrived in Tehran, quoting a source in the Russian Embassy in Iran. It did not give a reason for the visit.