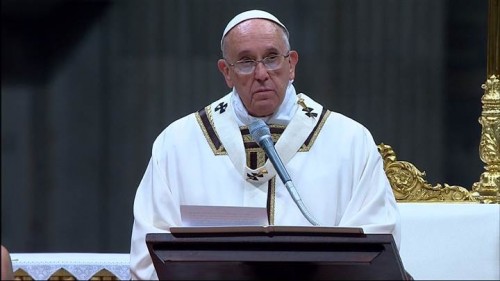 Pope Francis, who has repeatedly called for an end to the death penalty, on Sunday proposed that Catholic leaders suspend the practice for a year to mark the Holy Year of Mercy.

“I make an appeal to the conscience of all rulers, so that we can achieve an international consensus for the abolition of the death penalty,” the Pope said in his Sunday address in St. Peter’s Square.

“And I propose to those among them who are Catholic to make a courageous and exemplary gesture: that no sentence is executed in this Holy Year of Mercy.”

The Pope launched the Jubilee Year of Mercy on December 8. The church’s formal yearlong push for mercy and forgiveness is set to continue through November 20, when the feast of Christ the King will be celebrated.

Francis voiced his support Sunday for an international conference taking place on Monday in Rome called A World Without the Death Penalty, saying he hoped the conference would bring renewed energy to the mission to end capital punishment.

The Pope underlined the possibility of redemption for offenders and a “criminal justice open to the hope of reintegration into society.”

“The commandment ‘Thou shalt not kill’ has absolute value and applies to both the innocent and the guilty,” he said on Sunday.