Pope Francis: “Avoiding pregnancy is not an absolute evil” 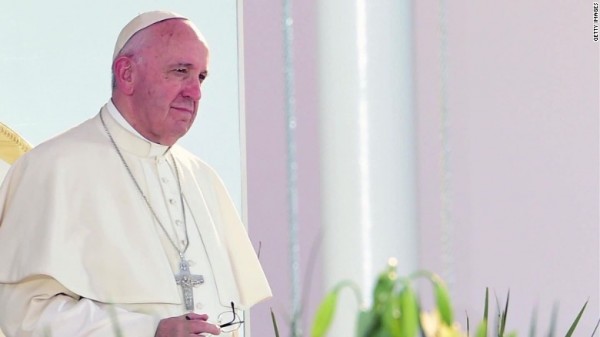 Pope suggests contraceptives could slow spread of Zika. “Avoiding pregnancy is not an absolute evil” , he said
Share:

On the frontline of Brazil’s fight against Zika, Vandson Holanda sends Roman Catholic volunteers into the poorest areas of this city, showing residents how to protect themselves against mosquitoes that carry the virus linked to birth defects.

Get rid of trash where water accumulates and allows the mosquitoes to lay eggs. Wear plenty of repellant and clothing that covers arms and legs. Close shower drains so the insects cannot find pooled water inside your home.

But there are no lessons offered on methods to avoid getting pregnant, which Brazilian officials and international public health experts have urged women to do until the Zika epidemic is under control.

The crisis is putting pressure on Church doctrine that bans all forms of contraception, and has even stoked a debate over abortion in many conservative Latin American nations.

“I think, and this is my personal opinion, that the Church will have to re-think its position on contraception urgently as a result of Zika,” said Holanda, coordinator of the Church’s health committee in four northeastern states at the center of the epidemic.

“The current view is not realistic.”

On Thursday, Pope Francis appeared to suggest the Church could soften its ban on contraception for women as they face the Zika crisis.

“Avoiding pregnancy is not an absolute evil” Francis told reporters on the papal plane as it returned to Rome following his tour of Mexico.

He said there is a precedent of exceptional dispensations allowing women to use contraception, citing a decades-old case of Pope Paul VI permitting nuns in Africa to use birth control pills because they risked being raped in political conflicts.

The pope did not elaborate further and did not indicate if the faithful who want to avoid pregnancies amid a Zika epidemic would have the Church’s explicit blessing to do so or if priests at the local level would just look the other way, at least until the Zika situation becomes clearer.

Francis did make clear there would be no change to the Church’s position on abortion. “It is a crime. It is an absolute evil.”

Much remains unknown about Zika, including whether it actually causes microcephaly, a condition marked by abnormally small head size that often results in neurological and developmental problems. Brazil is investigating the potential link between Zika and nearly 4,500 suspected cases of microcephaly.

Researchers have identified evidence of Zika infection in most of 508 confirmed microcephaly cases, either in the baby or in the mother, the health ministry said Wednesday, but have not confirmed that Zika was the cause.

Ahead of Francis’ visit to Mexico, a senior Vatican official said he did not expect any change to the Church’s position on birth control and Catholic scholars also said it was unlikely.

“I find it quite amazing that there has been so much attention given to contraception, birth control and abortion legislation regarding Zika, when I think much more attention should be given to the source of the Zika problem, which are mosquitoes,” said Father Robert Gahl, professor of ethics at the Pontifical Holy Cross University in Rome.

In cases of Zika infection, the Church’s focus would be on providing a woman with the best health care possible to either avoid being infected in the first place or to care for a child with birth defects, along with pushing abstinence, he said.

CONTRACEPTION ‘WILL NOT SOLVE’ ZIKA CRISIS

In Colombia, facing a Zika crisis nearly as acute as Brazil’s, Danelia Cardona, a psychologist who is the director of the nation’s Episcopal Conference’s Department for the Promotion and Defense of Life, said questioning the Church’s position on contraception was not useful as women already make their own decisions on the matter.

She added that contraception “will not solve the Zika crisis” – only the eradication of the virus-carrying mosquitoes would.

Cardinal Odilo Scherer, the archbishop of Sao Paulo and widely considered a leading contender to be elected pope three years ago, has appeared to offer openings for the use of condoms when it comes to halting the spread of disease, though in an emailed response to Reuters he emphasized the fight against Zika must focus on getting rid of the mosquitoes, avoiding bites and caring for those who have birth defects.

Fernando Altemeyer, a theology professor at the Catholic University of Sao Paulo and a former priest, said Zika is unquestionably sparking debate about contraception within the Church.

“Zika has put humanity in crisis and if it worsens it will force the Church to make a decision on saving human life versus saving its own dogma … There is no easy answer, there really is nothing in canon law to act as a guide,” he said.

“Zika is putting at risk the most innocent – unborn children – so it would be entirely adequate that the Church shift its position on contraceptives for this case.”

About 65 percent of Brazilians are Catholics and polls consistently show more than three-fourths of the population reject changes to laws that only allow abortion in the case of rape, if the mother’s life is in danger or in the case of anencephaly, when a fetus would be born missing parts of its brain and skull and a quick death after birth is almost certain.

But polls also show Brazilians overwhelmingly approve of using condoms when it comes to preventing pregnancies or diseases.

“As a Catholic, I’m against abortion, but ideally the Church would allow more options for women who want to prevent getting pregnant in the first place,” said Debora Mariano, a 23-year-old beautician and mother of a 6-year-old boy, as she took a work break in central Rio de Janeiro this week.

“It feels like we have little protection against Zika, that government efforts to stop it are not working, so those of us too scared to get pregnant with this illness out there have no other option but to go against the Church.”