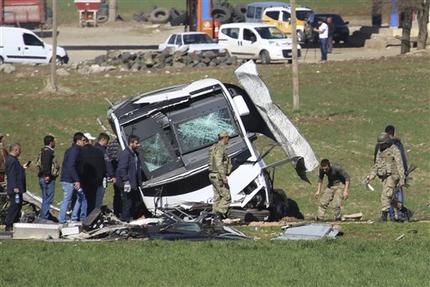 Members of Turkish forces gather around a bus that was destroyed in an explosion on the road linking the cities of Diyarbakir and Bingol, in southeastern Turkey, Thursday, Feb. 18, 2016. Six soldiers were killed after PKK rebels detonated a bomb on the road as their vehicle was passing by, according to Turkeys state-run Anadolu Agency.The deaths come a day after a suicide bombing claimed the lives of at least 28 people and wounded dozens of others. (AP Photo/Mahmut Bozarslan)
Share:

Turkey accuses several of its enemies of carrying out a deadly suicide bombing in Ankara. The prime minister blames the attack on the Kurdish militia in Syria, Turkey’s own outlawed Kurdish rebel group and the Syrian government. A look at Turkey’s friends and foes in the Syria conflict:

KURDISTAN WORKER’S PARTY, or PKK: Based in Turkey, this group has been engaged in a bitter three-decade fight for Kurdish autonomy in southeast Turkey. More broadly, it is also fighting for an independent state of Kurdistan that would comprise southern Turkey and northern regions of Iraq and Syria. The conflict, which has claimed more than 40,000 lives, flared up in July. The PKK is considered a terrorist organization by Turkey, the European Union and the United States.

PEOPLE’S PROTECTION UNITS, or YPG: Based in Syria, it is the Kurdish-dominated armed wing of the Syrian Democratic Union Party, or PYD. It was formed in 2004 as a militia to combat Syrian government forces, and Turkey accuses it of being affiliated with the PKK. After the war in Syria started, the YPG largely concentrated its efforts on fighting the Islamic State group, leading to charges from Turkey that it is allied with Syrian government. The YPG has emerged as one of the more effective militias fighting in Syria, raising concerns in Turkey that it might pose a long-term threat to its territory.

SYRIA DEMOCRATIC FORCES: A U.S.-backed military alliance of Kurdish, Arab and Christian fighters that is now the main fighting force against IS. The group is dominated by the YPG and thus regarded unfavorably by Turkey.

PESHMERGA: Based in northern Iraq, it serves as the military of the autonomous Kurdistan region. It has received substantial backing from the U.S., Germany and other Western countries in its fight against the Islamic State group in Iraq. Turkey, a NATO member, has enjoyed close economic ties with the autonomous Kurdistan region but is nevertheless suspicious of the Peshmerga links to Kurdish groups in Turkey and Syria.

ISLAMIC STATE GROUP: The most prominent Islamic extremist group fighting in Syria and Iraq. Ankara alleges IS has carried out attacks inside Turkey, and the Turkish military has bombed IS positions. However, the Kurds, Syria and Russia claim the Turkish government has allowed IS militants to move freely in Turkey as a counterweight against the Syrian Kurds.

SYRIAN GOVERNMENT: Ties between Ankara and Damascus – marked by a personal friendship between Turkish President Recep Tayyip Erdogan and Syrian President Bashar Assad – soured following Syria’s crackdown on the opposition in 2011. Turkey lately has also directed its ire at Russia after Moscow began supporting the Syrian government with airstrikes. However, as a NATO member, Ankara has given its allies – including the U.S. – permission to use the Incirlik Air Base to strike IS, which is fighting the Syrian government. 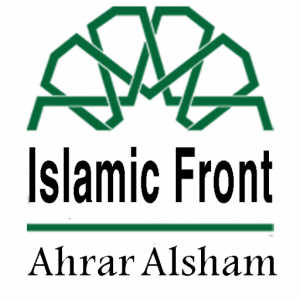 AHRAR AL-SHAM: An ultraconservative group in Syria that enjoys the support of Turkey in its fight against the Assad government. Ankara considers it an acceptable Islamist force, compared with IS. The group’s supply lines across the Turkish-Syrian border would be threatened if the YPG manages to establish contiguous territory along the frontier.