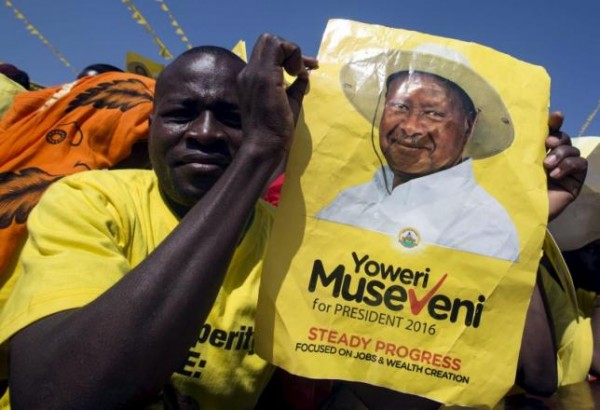 Ugandans start casting votes on Thursday to decide whether to give Yoweri Museveni, in power for three decades, another term in office.

All sides contesting the election accuse each other of stoking tensions and assembling vigilante groups, and the leading opposition candidates have predicted vote rigging.

Museveni, 71, has pleased Western allies by sending in peacekeeping troops to hotspots such as Somalia. He faces two main challengers – longtime opposition leader Kizza Besigye, who has run unsuccessfully in three previous elections, and former prime minister Amama Mbabazi, who until recently was a close ally.

On the eve of the vote, Besigye told Reuters Museveni was “not going to go peacefully” and said his supporters may stage street protests to dispute the election outcome.

Museveni, who came to power in 1986 after waging a five-year guerrilla war, is hailed by many Ugandans as providing decades of relative peace and economic stability. But his rivals are drawing strength from a clamor for fresh leadership.

Uganda is an overwhelmingly youthful country, and all the candidates have sought to stir the enthusiasm of younger voters.

Museveni’s rallies featured performances by leading pop stars, while Besigye and Mbabazi have centered their campaigns on pledges to boost employment and tackle corruption, issues that young voters emphasize.

On the streets of Kampala, most young voters identified themselves as Besigye supporters.

Joel Nyonyintono, a 26-year-old entrepreneur, said he is ashamed of the condition of Uganda’s roads and hospitals and craves an innovative leader.

“We are so far behind. We need to open our eyes and move into the ‘now’ tense,” Nyonyintono said as he sat near a church in the capital.

But other voters say the idea of “change” makes them nervous.

Nanteza Beatrice, 56, a fruit vendor in a Kampala market, said she believes Uganda is not ready for a post-Museveni era.

“We have had peace for a long time and these young people are taking it for granted because they don’t know how it was before him,” she said.