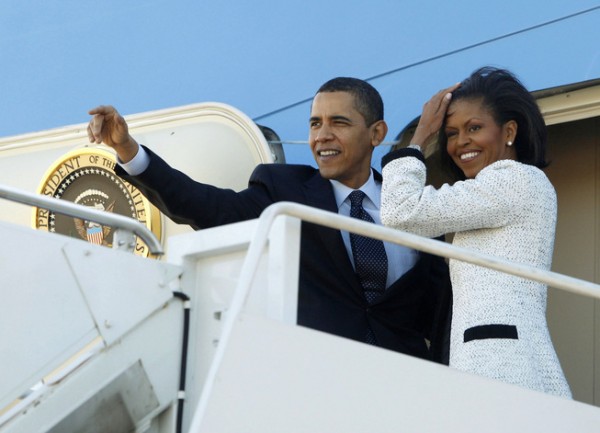 U.S.President Barack Obama and first lady Michelle Obama wave from the steps of Air Force One at Andrews Air Force Base March 31, 2009,
Share:

US President Barack Obama announced Thursday he and First Lady Michelle Obama will make a landmark visit to Cuba on March 21-22, pledging to address human rights as America pursues a historic thaw with its former Cold War foe.

“Next month, I’ll travel to Cuba to advance our progress and efforts that can improve the lives of the Cuban people,” the US leader said in one of a series of tweets.

“We still have differences with the Cuban government that I will raise directly. America will always stand for human rights around the world.”

The Cuba stop, part of a broader trip to Latin America, will cap what administration officials see as one of Obama’s legacy foreign policy achievements: normalising relations with Cuba and taking steps towards expanded commercial relations after a 54-year freeze.

Obama and Cuban President Raul Castro shocked the world in December 2014 by announcing the former adversaries would move to normalise relations.

The US president’s visit will correspond with the finalisation of a peace deal for Colombia that was encouraged and sponsored by Castro.

The Colombian government and the FARC rebel group are expected to finalise a peace deal by March 23 in Havana that would end a 50-year civil war in the South American nation.

Obama said in a December interview with Yahoo News that he hoped to visit Cuba in 2016 but only if enough progress had been made in bilateral relations and he was able to meet political dissidents as part of an effort to “nudge the Cuban government in a new direction”.

A Cuban foreign ministry official said in reaction to the December interview that Obama was welcome to visit Cuba but not to meddle in its internal affairs.

It was not immediately clear what detailed arrangements would be made for the trip or how diplomats from the two nations proposed to bridge that divide as part of the plans.

Washington and Havana restored diplomatic ties in July but commerce remains limited by the US trade embargo, which includes a ban on American tourism to the island.

The Republican majority in Congress has defied Obama’s call to rescind the five-decade-old embargo, so he has used his executive authority to relax trade and travel restrictions.

On Tuesday, American and Cuban officials signed an arrangement to restore scheduled air services between the two countries after half a century.

Republican presidential candidates Marco Rubio and Ted Cruz, both sons of Cuban immigrants, have been sharply critical of his opening to Cuba in the absence of political change there.

Rubio wasted no time in criticising reports of Obama’s forthcoming trip. Asked at a CNN town hall event in South Carolina whether he would visit Cuba, Rubio replied: “Not if it’s not a free Cuba.”

At the same event, Cruz also criticised Obama’s move, saying he would not go to Cuba “as long as the Castros are in power”.

“What Obama has shown to our enemies is weakness and appeasement,” Cruz said, lumping together Obama’s steps towards improving US relations with Cuba and Iran. “I think it’s a real mistake. I think the president instead ought to be pushing for a free Cuba,” he said. Instead, he will go and “essentially act as an apologist”.

The last and only sitting US president to visit Cuba was Calvin Coolidge in 1928.