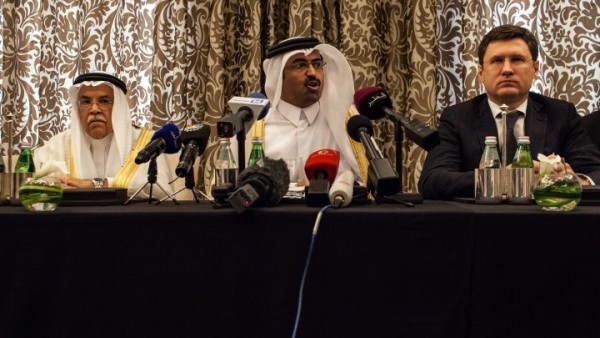 Top oil producers Russia and Saudi Arabia agreed on Tuesday to freeze output levels in what could be the first joint OPEC and non-OPEC deal in 15 years aimed at tackling a growing glut and helping prices recover.

A major sticking point in sealing a deal may be Iran, which was absent from the talks and has been determined to raise production.

Below are reactions from banks and market analysts on the impact of the deal on the crude market:

* GOLDMAN SACHS: Deal to have little impact on oil markets

“The details of this agreement suggest that such a freeze will have little impact on the oil market as proposed, while there remains high uncertainty that it even materializes.

“While an agreement could create the perception that more could be achieved, such as production cuts, we believe this would not be sufficient to set a floor on prices as they will only stabilize once inventories stop building, which at current proposed output levels only occurs in 2H16.”

* CITI FUTURES: A freeze is not a cut

“This is far more of a political statement than a support for oil prices in our view, an offer that Iran has little choice but to refuse.

“We expect Iran to reject limits on its exports, which lets other producers with a technical out for ignoring the freeze, while Saudi Arabia gets to claim that low prices are Iran’s fault for refusing the unacceptable offer.

“The freeze is a gesture, not a reason to reduce our forecast for OPEC total production to rise to 33 million bpd as Iran continues to ramp up production and others either maintain output as planned or go ahead with planned increases.”

“Not only has talk moved from cuts to a freeze, but such a freeze comes from producers who weren’t expected to raise production materially in any case (Russia, Venezuela, Saudi Arabia and Qatar).

“A credible agreement to hold production flat by all OPEC members at the January level would be quite meaningful in tightening forward expectations of market balance as it would remove the threat of incremental Iranian volumes into 2017.”

* MACQUARIE: Not a game-changer but step in right direction

“Arguably, a positive outcome is Iraq giving up the right to further growth; eliminating the tail risk of Iraqi production ramping up significantly in 2016.

“The meaningfulness of this agreement lies in the fact that it may mark one of the first coordinated steps by OPEC in a process to assess whether the members of the organization have sustained enough pain emanating from the low price and will re-install its previously foregone policy of market stability.

“Our analysis suggests that rebalancing is occurring and that we are on track for a rebalance to seasonal norms by 3Q16. A positive outcome on these talks could accelerate the rebalance.”

* BARCLAYS: Market still between a rock and a hard place

“Even if the agreement is successful, the upside for oil prices that would result looks limited, and OPEC still faces the dilemma of aiming for either higher prices or market share, but is unable to achieve both.

“Any positive oil price impact from this move, beyond a knee-jerk covering of short positions, is highly contingent on other key oil producers joining in, and although the announced plan is the first concrete attempt at limiting output that Saudi Arabia has publicly supported, a lot of hard negotiations lie ahead if it is to prove successful.

“Even then the key beneficiaries could turn out to be U.S. (shale) oil producers.”

* CAPITAL ECONOMICS: Important deal, but plenty of room for disappointment

“We are wary …, as it was unlikely that either country would have increased production further anyway. For the deal to have any teeth, Saudi Arabia in particular needs to be willing to cut output, not least to offset the increased supply still to come from Iran.”

(1) Iran has indicated it is unwilling to freeze output, (2) the success of the deal will depend on Russia to play its full part, and (3) total OPEC output would still be exceptionally high and maintain the excess supply already in place even if the deal does go through.

“This might be better than a further increase, but it is not the output cuts that some in the markets have been hoping for.”

* COMMERZBANK: Agreement is on a knife edge

“It remains to be seen whether this will result in the oversupply being reduced, as this would require Iran and Iraq to cooperate on the agreement.

“Now that sanctions have been lifted, Iran is hardly likely to be willing to leave its oil production at the low sanction-era level of 2.9 million barrels per day given that Teheran’s uppermost priority is to recoup the market share it has lost.”

“It is too early to decide if this will be a deal that does not collapse very quickly. For now, the announcement of this deal could increase the likelihood of further short-covering in the short term. Whether this is a good opportunity to reset shorts at higher levels remains a question mark.

“I think the deal is suggesting a weakness in Saudi Arabia with an opportunity for them to enter into a face-saving arrangement to move away from their failed market share strategy as this deal is not a cut (yet) but could eventually lead to a cut in production down the road.”