Iran is the main obstacle to the OPEC, non-OPEC deal to freeze oil production 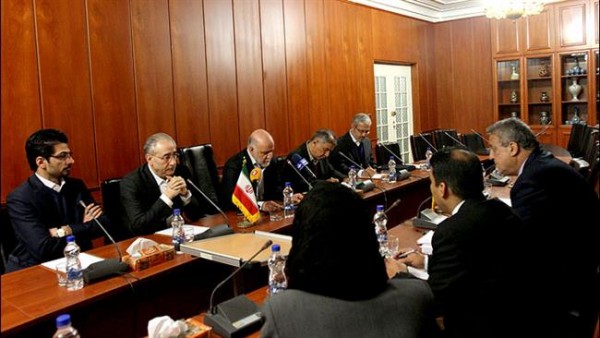 Talks in Tehran between Iranian oil minister Bijan Zanganeh and his counterparts from Iraq, Qatar and Venezuela lasted for nearly three hours. Visiting ministers left without making comment. Zanganeh was due to make televised remarks at around 1500 GMT (1000 ET).

Iran is the major obstacle to the first joint OPEC and non-OPEC deal since 2001, having pledged to increase output sharply to regain market share lost during years of sanctions.

The meeting in the Iranian capital followed a deal reached on Tuesday by OPEC power Saudi Arabia and non-OPEC Russia, the world’s top two producers and exporters, to freeze production at January levels if other big oil nations agree to join.

OPEC Gulf producers – Qatar, Kuwait and the UAE – as well as Venezuela said they would join the pact, aimed at tackling a growing oversupply and helping prices recover from their lowest in over a decade.

“Asking Iran to freeze its oil production level is illogical … when Iran was under sanctions, some countries raised their output and they caused the drop in oil prices.” Iran’s OPEC envoy, Mehdi Asali, was quoted as saying by the Shargh daily newspaper on Wednesday.

“How can they expect Iran to cooperate now and pay the price?” he said. “We have repeatedly said that Iran will increase its crude output until reaching the pre-sanctions production level.”

The freeze plan has so far failed to push up oil prices, due to concerns Iran would not participate and that a deal would do little to ease the global glut as it would still allow Russia and Saudi Arabia to keep pumping at near record levels.

Iran exported around 2.5 million barrels per day (bpd) of crude before 2012, but sanctions cut that to around 1.1 million bpd. Tehran has pledged to raise supply by around 1 million bpd in the next 6-12 months.

This would only add to the global glut, which has been fueled by U.S. shale output and a decision by Saudi Arabia to pump at full capacity to drive higher-cost producers out of the market.

The world is already producing more than 1 million bpd than it consumes, with oil stockpiles at record levels.

As a result, prices fell below $30 per barrel in January from as high as $115 in mid-2014, hammering the finances of Russia, Saudi Arabia and other producers.

Brent oil futures rose 3 percent on Wednesday after losing as much as 4 percent the day before.

“A freeze is not the same as a cut, and somewhat disingenuously, keeping crude production at January levels actually implies higher-than-expected annual output … and so can hardly tackle the current market oversupply,” JBC Energy said in a note.

Two non-Iranian sources close to the OPEC discussions told Reuters on Tuesday that Iran might be offered special terms as part of an output freeze deal. “Iran is returning to the market and needs to be given a special chance, but it also needs to make some calculations,” said one source.

The sources did not elaborate on the special terms, which could be anything from setting limited production increases to linking future output rises to a recovery in oil prices.

Olivier Jakob from Petromatrix consultancy said that if Saudi Arabia were to freeze output at January levels, the kingdom would need to cut exports by 0.5 million bpd in the summer months, when it burns more oil for power generation at home.

“The production freeze can therefore be seen as an un-official way for Saudi Arabia to make some room for the restart of the Iranian exports,” he said.

The last global deal in 2001 saw Saudi Arabia persuade Mexico, Norway and Russia to contribute to production cuts, although Moscow did not follow through and raised exports instead.