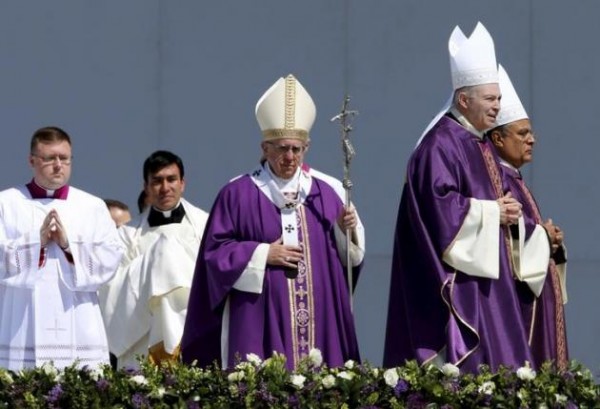 Pope Francis celebrates a Mass before a crowd of hundreds of thousands in Ecatepec, Mexico, February 14, 2016. REUTERS/Henry Romero
Share:

Celebrating Mass in front of hundreds of thousands in one of Mexico´s poorest and most dangerous cities, Pope Francis on Sunday took a swipe at the country’s rich and corrupt elite.

Decrying “a society of the few and for the few”, he denounced deep inequality and the vanity and pride of those who consider themselves a cut above the rest.

“That wealth which tastes of pain, bitterness and suffering. This is the bread that a corrupt family or society gives its own children,” the pope said at the Mass in the city of Ecatepec.

Mexico is home to one of the world´s richest men, billionaire Carlos Slim, and a wealthy political class stained by corruption even as much of the country is steeped in poverty and violence.

A gritty expanse of cinder block homes north of Mexico City, Ecatepec has seen a surge in crime in recent years as it became infested with warring drug cartels.

Fueled by a weak economy and youth unemployment, gang violence has driven the city’s murder rate to one of Mexico’s highest.

It is notorious for the unsolved murders of scores of women, the bodies of many found abandoned in garbage dumps or tossed in a canal only miles from where Francis spoke on Sunday.

It is also a home to a giant statue of “Santa Muerte”, or Saint Death, a cult figure followed by millions across the Americas. The saint is often depicted as a skeletal “grim reaper” draped in white satin robes, beaded necklaces and carrying a scythe, and is believed to grant requests without judging people.

A sea of Roman Catholic faithful greeted the pope as he flew into Ecatepec aboard a white helicopter, many wearing T-shirts emblazoned with his image, chanting, cheering and waving flags. Local officials expected as many as 2 million people to turn out.

“We are living through a period of great violence … May (the pope) give us strength to continue to bear this, to keep struggling against it,” said Maria Dolores Angeles Martinez, a 26-year-old housewife from Ecatepec.

Across the country, more than 100,000 people have been killed in drug violence over the last decade and some 26,000 are missing.

President Enrique Pena Nieto has failed to significantly curb the bloodshed, with murders rising last year after falling early in his term.

Before becoming president, Pena Nieto was governor of the State of Mexico that is the home to Ecatepec. In the second half of his 2005-2011 term as governor, the murders of women doubled.

Corruption and incompetence are rampant in under-funded police forces across Mexico. The vast majority of murders are never solved and family members complain authorities show little interest in the cases of the missing.

Unlike his predecessor Pope Benedict, who visited Mexico’s conservative heartland in 2012, Francis is stopping in some of the country’s most troubled corners on his first trip as pontiff.

He will say Mass with indigenous communities in Mexico’s poorest state Chiapas, and speak with young people in Morelia, the capital of Michoacan state where drug gangs and armed vigilante groups have waged a bloody conflict.

The pope will end his trip in the notorious northern border city of Ciudad Juarez, where he will address the tide of illegal immigration into the United States, meet relatives of victims of violence, and visit a prison.

On Saturday, he spoke out against corruption in a speech before Pena Nieto and political elites.

Pena Nieto’s government has drawn criticism for failing to go after corrupt politicians, even those indicted in the United States. He, his wife and his finance minister have all been embroiled in conflict-of-interest scandals over houses purchased from government contractors.

Addressing Mexico’s bishops on Saturday, Francis exhorted them to speak out more boldly against drug traffickers, calling the drug trade a social cancer eating away at the country.