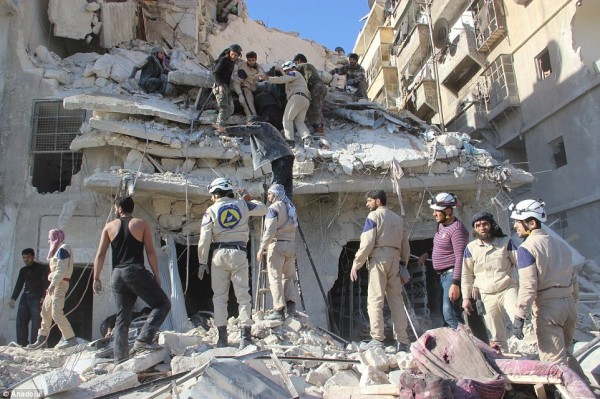 Blitzed: Syrians try to rescue survivors who are trapped under the rubble of a collapsed building after Russian fighter jets bombed the opposition-controlled Sukuri neighborhood in Aleppo. Raids yesterday reportedly killed fourteen people including children and babies.
Share:

The United States and France criticized Russia on Saturday for bombing civilians in Syria, a charge Russian Prime Minister Dmitry Medvedev rejected as major powers bickered openly a day after agreeing to a pause in combat.

U.S. Secretary of State John Kerry accused Russia of hitting legitimate opposition groups and civilians with its bombing campaign and said Moscow must change its targets to respect the ceasefire deal clinched on Friday.

Medvedev earlier said such accusations were “just not true”, while Russian Foreign Minister Sergei Lavrov said the ceasefire was more likely to fail than succeed, as Syrian government troops made fresh advances around Aleppo, the biggest city in the country before the war.

International powers agreed on a break in the fighting in late night talks in Munich on Friday. But the deal does not go into effect for a week and in the meantime, Syrian President Bashar al-Assad’s forces, backed by Russian air power, are consolidating their gains against rebels.

“To date, the vast majority of Russia’s attacks have been against legitimate opposition groups,” Kerry said at the Munich Security Conference, an annual event that attracts leaders from across the world and where policymakers often clash openly on stage. “To adhere to the agreement it made, Russia’s targeting must change.”

He accused Russia of dropping so-called “dumb bombs” in Syria that do not have a precise target, saying this has led to the killing of civilians.

The differences between the stakeholders in a Syria settlement highlighted their lingering divisions despite Friday’s “cessation of hostilities” agreement, which was not signed by any of the warring parties on the ground – government forces and the opposition.

“We know that to find the path to peace again, the Russian bombing of civilians has to stop,” Valls told the conference.

If implemented, the truce deal would allow humanitarian aid to reach besieged towns. But several Western countries have said there is no hope for progress without a halt to the Russian bombing, which has decisively turned the balance of power in favor of Assad after almost five years of conflict.

On Friday, Turkey’s foreign minister said Russia was targeting schools and hospitals with its bombing, putting the blame squarely on Moscow for the wave of tens of thousands of displaced people who have arrived at the Turkish border over the past week.

“There is no evidence of our bombing civilians, even though everyone is accusing us of this,” he told the conference, sitting next to Valls.

Moscow wanted to protect its national interests and to prevent militant extremists getting to Russia, Medvedev said.

The Syrian Observatory for Human Rights, which tracks the conflict, reported on Saturday that Syrian government forces were poised to advance into the Islamic State stronghold of Raqqa province and allied Russian jets kept up air strikes on rebel-held towns north of Aleppo.

Russia’s assertive posture in Syria and over Ukraine has raised diplomats’ concerns about geopolitical instability.

“You could say even more sharply: We have fallen into a new Cold War,” he said. “Nearly on a daily basis, we are being blamed for the most terrible threat to NATO as a whole, to Europe, to America, to other countries.