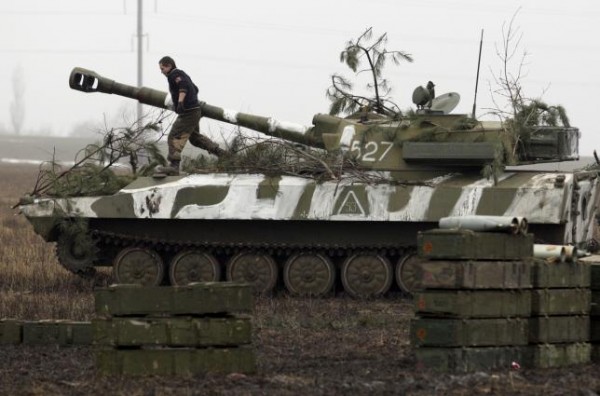 A member of the self-proclaimed Donetsk People’s Republic forces walks on top of a self-propelled artillery gun during tactical training exercises in Donetsk region, Ukraine, February 4, 2016. REUTERS/Alexander Ermochenko
Share:
Violence in eastern Ukraine is intensifying and Russian-backed rebels have moved heavy weaponry back to the front line, international monitors warned on Saturday as Moscow responded by accusing Kiev of violating a peace deal.

In the latest sign that peace efforts have made scant progress almost two years since Moscow annexed Crimea, Russian Prime Minister Dmitry Medvedev described East-West relations as having “fallen into a new Cold War” and said NATO was “hostile and closed” towards Russia.

Implementation of a deal agreed in Minsk a year ago, which would allow for the lifting of sanctions on Russia, and a lull in violence late last year raised hopes that the conflict that has killed more than 9,000 people could be resolved quickly.

But Lamberto Zannier, who heads the Organisation for Security and Co-operation in Europe (OSCE) monitoring eastern Ukraine, said the situation had “become difficult again.”

“We see a multiplication of incidents, violations of the ceasefire,” he told Reuters at the Munich Security Conference. “We’ve seen cases of redeployment of heavy armaments closer to the contact line … and multiple rocket launchers, artillery being used,” he said, referring to the heavy weaponry that is meant to be removed under the Minsk deal.

Medvedev, also speaking in Munich, accused Kiev of trying to shift the blame onto Moscow for the continued shelling in the industrial regions of eastern Ukraine now under rebel control.

“The Minsk agreements have to be observed by everyone. But we believe that it’s first and foremost up to the Kiev authorities to do that,” he said.

The West says it has satellite images, videos and other evidence to show Russia is providing weapons to the rebels and that Moscow has troops engaged in the conflict that erupted following Russia’s annexation of Ukraine’s Crimea in 2014.

NATO’s Supreme Allied Commander Gen. Philip Breedlove said Russia had the power to “dial up and down” the conflict as it wished to put pressure on the government in Kiev.

Extended at the end of last year, the Minsk peace deal signed by Russia, Ukraine, France and Germany aims to give Ukraine back control of its border with Russia, see all heavy weapons withdrawn, return hostages and allow an internationally monitored local election in the east.

Zannier said the vote could not happen until there was a ceasefire and even then it would be difficult to do by mid-year because international observers need to be in place.

Medvedev said Ukraine, not Russia, was in breach of the Minsk deal because Kiev was yet to change Ukraine’s constitution to grant special status to eastern Ukraine.

Russia wants an amnesty for mainly Russian-speaking people in the east who seized government buildings during the upheaval of early 2014, when pro-European protesters toppled Russia-backed President Viktor Yanukovich.

“Without this amnesty, these people won’t be able to participate in the elections,” Medvedev said.

“Neither the people of Ukraine nor their partners in the international community believe they have done enough,” U.S. Secretary of State John Kerry said.