Kerry blasts Russia over its actions in Ukraine, Syria accusing it of ‘repeated aggression’ 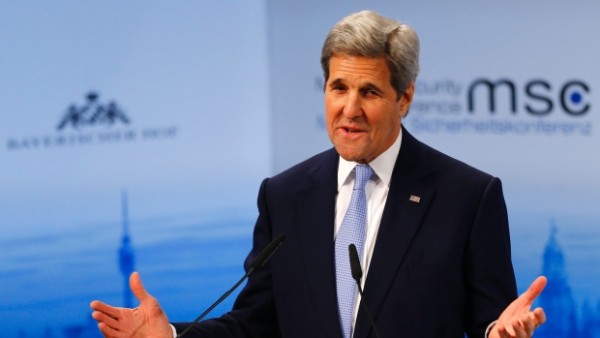 U.S. Secretary of State John Kerry on Saturday sharply criticized Russia for its actions in Ukraine and Syria, accusing Moscow of “repeated aggression” in both places.

In a speech at the Munich Security Conference, Kerry said Russia is defying the will of the international community with its support for separatists in eastern Ukraine and its military intervention in Syria on behalf of President Bashar Assad.

His comments came just after Russia’s prime minister, Dmitry Medvedev, told the conference that the West is rekindling the Cold War with sanctions imposed on Russia over Ukraine and with new NATO moves.

Kerry praised European nations for holding firm on the Ukraine penalties. He urged Moscow to act in good faith in forging a truce in Syria and to allow a political transition that would end the civil war.

He repeated allegations that Russian airstrikes in Syria have not been directed at terrorists but rather at moderate opposition groups supported by the U.S. and its European and Arab partners. Kerry also said that Russia would have to change tactics if an agreement Friday for a temporary truce in Syria is to actually take effect in a week.

“To date, the vast majority, in our opinion, of Russia’s attacks have been against legitimate opposition groups and to adhere to the agreement it made, we think it is critical that Russia’s targeting change,” Kerry said. “If people who want to be part of the conversation are being bombed, we’re not going to have much of a process.”

Kerry added that the only way to end the Syrian conflict and ultimately defeat the Islamic State group is a political transition that removes Assad from power.

“Some argue that the reason humanitarian access has been denied and indiscriminate bombing continues is because Assad and his allies, including Russia, might believe that by defying the will of the international community, they can win the war,” he said. “If that is what Russia and Assad think, then I believe they would have been missing the lessons of the last five years.”

The opposition “may be pushed back here and there but they are not going to surrender,” Kerry said.

On Ukraine, Kerry said Russia would continue to be subject to sanctions until it and the rebels it supports in the east come into full compliance with a political agreement reached last year in Minsk, the capital of Belarus.