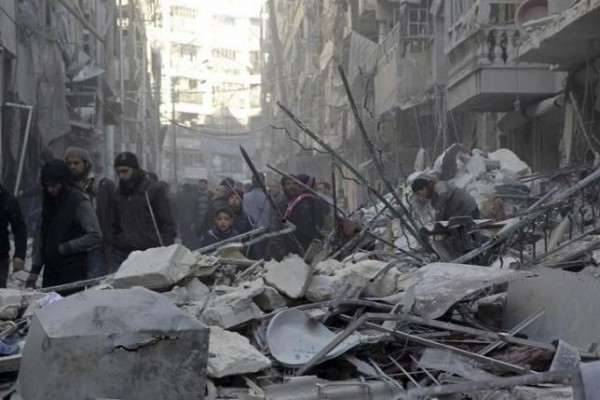 Intensifying military offensives show the Syrian government and its allies are not serious about finding a political solution to the five-year-old conflict, the new leader of a major rebel group said on Friday.

In his first interview since becoming leader of Syrian insurgent group Jaish al-Islam after the former chief was killed in December, Issam Buwaydani said it was clear “the regime and its allies are not convinced of a political solution.”

“The biggest proof is that they continue to bomb Syrian cities and impose sieges on hundreds of thousands of unarmed civilians,” Buwaydani said in the interview with opposition activist news website Syrian Revolution Network.

Jaish al-Islam (Islam Army) is one of the biggest rebel factions in the Saudi-backed, opposition High Negotiation Committee (HNC) invited to the Geneva peace talks.

Buwaydani took over the leadership after predecessor Zahran Alloush — whose cousin Mohamed Alloush is the HNC’s chief negotiator for the Geneva talks — was killed in an air attack near Damascus in December.

“If the international community was serious about the success of a political solution, they would rein in Russian and Iranian aggression and ask them to leave Syria.”

“The Syrian government would have been taking its final breath” if it wasn’t for Russia’s “last minute” entry last September into the conflict, Buwaydani said.

Buwaydani said his group is fighting on many fronts in Syria despite a lack of supplies and weapons, especially anti-tank and anti-aircraft weapons.

Jaish al-Islam is viewed as a terrorist group by Russia, although many of Assad’s opponents view it as a legitimate part of the opposition.