U.S., EU, some Arab states donated less than $5 per capita to Syrian refugees in 2015 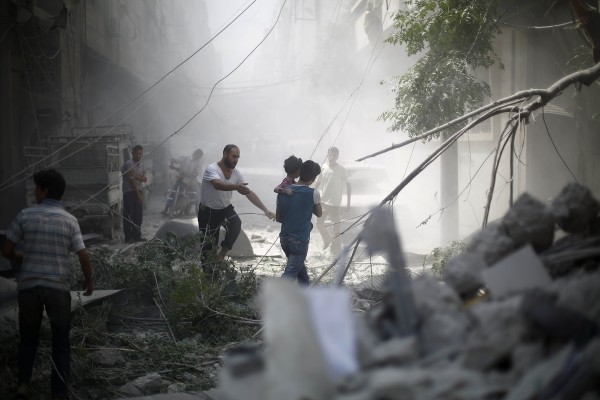 More than 10 million Syrians have been forced out of their homes due to the conflict, becoming either “internally displaced” or fleeing altogether, according to Amnesty International.
Share:
On Thursday, more than 70 world leaders are expected to meet in London for a conference aiming to raise $9 billion for Syrians. Unless all countries more than double their assistance this year, the conference will have failed.

Previous donor conferences have all failed. Humanitarian appeals have asked for the bare minimum needed for displaced and war-affected Syrians to survive, but the world has given only about half of what’s needed.

It may be a surprise to many that the assistance to the Syrian crisis has been so halfhearted and halfway compared to the magnitude of the needs. More than 18 million Syrians are in need of support: 13.5 million people inside Syria and 4.6 million refugees in the Middle East region. Total global assistance recorded last year equaled less than 85 cents per desperate Syrian per day.

A large number of European leaders are echoing the same message: “It is better and more cost-efficient to help people in their own region than to welcome cost-intensive asylum seekers and refugees in our own countries.” But it is a myth that they provide Syrian war victims with significant aid. The truth is that most European, American, Arab and Asian countries are neither receiving refugees, nor helping much in the region.

The relative biggest donor, Kuwait, provided $75 per capita to all Syrians in need last year, followed by Norway with $28. The United States and the European Union provided less than $5 per capita, and Gulf countries like Saudi Arabia, Qatar and the United Arab Emirates were no better. Many countries have done like Poland the last few years: not contributed significantly at all — neither by providing many refugees with protection nor by contributing noticeable assistance to the region.

The harrowing photos of starving children in the besieged town of Madaya demonstrate that nothing is more urgent than political agreements between the parties on ceasefires, protection of civilians and access for humanitarian assistance for civilians in the crossfire. There are no humanitarian solutions to political and military conflicts.

But, if the parties to the Syria talks in Geneva agree to give access to the 1.9 million in the “hard-to-reach” areas, we the humanitarian organizations would have just as meager resources to cover even the most basic needs of people. The funding crisis exacerbates the protection crisis.

Last year, many refugees and displaced in the region saw their food assistance cut in half. In Lebanon, seven out of 10 refugees are now living below the national poverty line. In Jordan, more than half of adults with chronic diseases are unable to access medicine and other health services. There are, in short, only impossible choices: stay in Syria’s neighboring countries without means to support your family and without access to essential services, return to Syria’s killing fields or sell everything to journey towards Europe.

So enough words about support to refugees and the host countries — the international community must agree to a bold new deal for Syrians and for the region. We need a Marshall Plan-style initiative — securing large investments in Syria’s neighboring countries, strengthening the infrastructure and public services and creating new jobs for refugees as well as citizens of host countries. In return, the host governments need to allow refugees the permits they need to access services and work legally in these countries.

This time, failure will throw even more Syrian children, youth, men and women into the abyss or onto rafts towards Greece. Parents see that all their savings are now depleted. They have no possibilities to earn an income in war-ravaged Syria or in Syria’s neighboring countries. There is no education for most of the children. And women and girls are increasingly vulnerable to exploitation. No wonder families see no alternative than to embark on a perilous journey towards Europe.

The region-wide underclass — created by the lack of aid and the lack of access to the job market and to education — will only create future desperation and unrest. The consequences of a failure in London will follow us for decades to come.