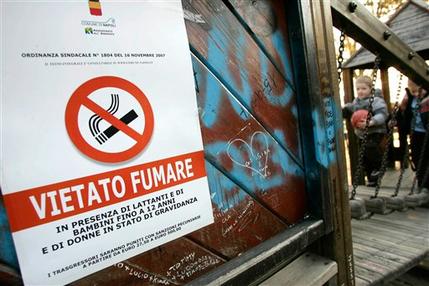 The smoking prohibitions extend bans on smoking in offices, restaurants, cinemas and other public places to the more private sphere of a car. They also specifically target pediatric hospitals and other medical facilities catering to pregnant women and newborns in a bid to cut the estimated 70,000-83,000 deaths a year the government attributes to tobacco smoke.

The measures are contained in a new law conforming to EU regulations aimed at dissuading young people from taking up the habit. They impose hefty fines on shopkeepers who sell to minors and cigarette producers who market to them, and include new requirements for warnings on cigarette packages.

The separate law against tossing cigarette butts is part of an anti-littler regulation that also punishes spitting out gum or tossing shopping receipts on the street.

Piergiorgio Benvenuti, president of EcoItalia Solidale, said about 11 million cigarettes are smoked every day in Rome, half of them squished on the street, where they often get trapped between cobblestones.

“This has an enormous environmental impact,” he said, noting that it takes between five to 12 years for a cigarette to break down. “Aside from how it looks is how much it costs Rome to clean this up.”

Roberta Pacifici, director of the smoking, drug and alcohol department of the Superior Institute of Health, said she expected the new measures would lead to a new drop in smoking rates across Italy, as occurred when the first bans were introduced.

The smoking bans in cars will “have a great educational value” for young people, she said.

Stefan Mihailovic, a 21-year-old student at Rome’s John Cabot University, praised the initiative though he acknowledged the fines will hurt.