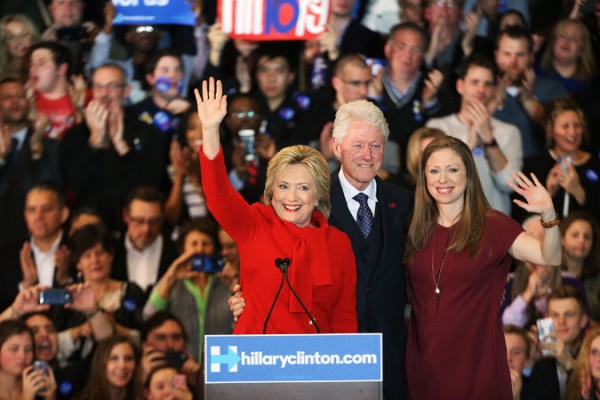 DES MOINES — Hillary Clinton was declared the winner of the Iowa caucuses on Tuesday after final vote counts showed her narrowly beating Senator Bernie Sanders of Vermont, according to The Associated Press and other news organizations.

According to the final results announced by the Iowa Democratic Party, Mrs. Clinton was awarded 700.59 state delegate equivalents, the terminology used in Iowa to represent candidates’ share of the total caucus vote. Mr. Sanders was awarded 696.82 delegates, and former Gov. Martin O’Malley received 7.61 delegates. Iowa Democrats historically do not release raw vote counts from each of the state’s 1,681 caucus precincts.

Based on these results, Mrs. Clinton is set to receive 23 of Iowa’s delegates and Mr. Sanders will earn 21 delegates. There are 4,763 delegates to the Democratic National Convention, so it will require 2,382 delegates to win the nomination.

The Iowa results were far closer than Mrs. Clinton and her advisers had expected. But her team embraced the result as a significant win given her historic troubles in the state — she came in third place in the 2008 caucuses — and Mr. Sanders’s popularity with many liberals here. (In a poll last month, 43 percent of likely Iowa Democratic caucusgoers described themselves as socialists.) Still, the close margin privately frustrated Mrs. Clinton and former President Bill Clinton, according to advisers, because they had hoped that a strong win would give her much-needed political momentum in New Hampshire, where Mr. Sanders has a solid lead in opinion polls.

With Iowa accounting for only 1 percent of the delegates at stake in the Democratic nominating race, Mrs. Clinton is already far ahead of Mr. Sanders in the delegate count that matters most, given her support from several hundred superdelegates who count toward the nomination. Mrs. Clinton and Mr. Clinton have expressed confidence to allies that she can afford to lose Iowa, as well as the next contest, the New Hampshire primary on Feb. 9, because of her strength in big-state, delegate-rich primaries and in the South where the Clintons believe their support among African-Americans will be a political firewall.

Rather than release precinct-by-precinct vote totals for Democratic candidates, Iowa uses a formula to allocate “state delegate equivalents” to the candidates based on their shares of support in each caucus site, where voters group themselves into different clusters that represent their preferred candidate. Democratic caucusgoers do not cast ballots that can be easily recounted; instead, state party volunteers and other workers in each precinct report the delegate totals based on the size of the clusters on Monday night.

State party officials said that 171,109 Iowa Democrats came out to caucus on Monday. Sanders campaign advisers believed they would win Iowa if the turnout was high, pointing to Barack Obama’s commanding win in the 2008 caucuses when about 240,000 people turned out. Neither the Sanders nor Clinton campaigns expected turnout to be anywhere near that level, but the Sanders advisers had hoped that it would be closer to 2008 than to 2004, when about 125,000 people showed up to caucus for Democratic candidates.

Two Sanders advisers said on Tuesday morning that they were awaiting the final caucus results before considering a possible challenge to the delegate calculations.

Mr. Sanders, on his flight from Iowa to New Hampshire late Monday night, said he would asked the Iowa Democratic Party to reveal the raw vote count underlying the delegate percentages.

Matt Paul, the director of Mrs. Clinton’s Iowa campaign, said there was nothing to contest.

Mr. O’Malley announced on Monday night that he was suspending his campaign, given his poor results in Iowa, leaving the fight for the Democratic nomination to Mrs. Clinton and Mr. Sanders.