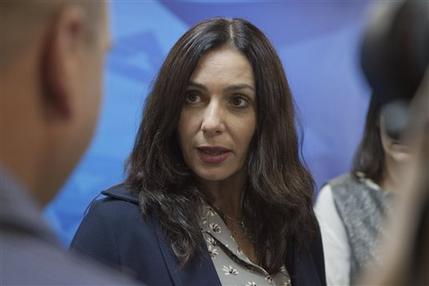 In this Sunday, June 21, 2015 file photo, Israeli Minister of Culture and Sport Miri Regev speaks during the weekly cabinet meeting in Jerusalem. Regev caused an uproar this week in parliament by vowing to press ahead with legislation that would allow her as minister to determine what cultural institutions and projects could be denied funding based on a list of criteria that could include denigrating the national flag or state symbols, denying Israels existence as a Jewish and democratic state, or promoting Israels independence day as a day of mourning.(AP Photo/Dan Balilty, File)
Share:
Israel’s cultural class is increasingly alarmed by what many see as a tightening noose on freedom of expression, as a hard-line government minister seeks to cut off funding for artists who are critical of the state and activists accuse them of outright treason.

The clash highlights a broader battle amid Israel’s rightward lurch after nearly 50 years of occupation of lands the Palestinians want for a future state. As Israel’s dovish camp erodes, a nationalist-religious right is rising that lends more emphasis to Israel’s character as a Jewish state, rather than one that is equally Jewish and democratic.

For Israeli artists, who like their counterparts worldwide tend to lean liberal, the chasm between their viewpoints and those of a growing number of Israelis is only deepening. Israel’s liberal cadre of musicians, authors and actors have long been some of the country’s most vocal critics, headlining peace rallies and staging provocative performances that challenge the prevailing orthodoxy.

“The first signs of dictatorship are the elimination of the other,” Ronit Matalon, a fiction writer, told the daily Haaretz. “The oxygen in the air we breathe is getting thinner.”

For months, with Israel mired in a wave of near-daily violence with the Palestinians, hard-line lawmakers and activist groups have been stepping up pressure on dovish opponents, primarily rights groups who are critical of government policies in the West Bank.

Leading that charge has been Im Tirtzu, a nationalist activist group that in December launched a fierce video campaign accusing human rights groups of being spies and foreign agents. The video questioned their loyalty because of their international advocacy and because such nonprofits tend to rely heavily on donations from European countries.

Im Tirtzu has now set its sights on artists. On Wednesday, it launched a new campaign on Facebook branding dozens of singers, actors and authors – including famed writer Amos Oz, perennially touted as a potential favorite for the Nobel Prize – as foreign agents because of their support for rights groups.

“We’re fed up with funding ‘artists’ who support organizations of foreign agents,” the group wrote.

“If you are active in a certain organization, you are not just a cultural figure. You are a political activist,” said Matan Peleg, the head of Im Tirtzu. “It’s important for me that (the Israeli public) know there is a hidden agenda here.”

The artists and their supporters have said the campaign incites violence and have demanded Im Tirtzu be restrained.

“Have they lost their minds?” asked Yair Lapid, head of the centrist Yesh Atid party. “This campaign of hate and incitement to violence by Im Tirtzu crosses a red line.”

Politicians across the political spectrum, including hardliners in the government, rejected Im Tirtzu’s latest campaign. Israeli Prime Minister Benjamin Netanyahu said he “opposes using the term traitor for those who disagree with me.”

Still, critics say the campaign is the result of an atmosphere stifling dissent nurtured by members of Netanyahu’s hawkish government.

Culture Minister Miri Regev caused an uproar this week in parliament by vowing to press ahead with legislation that would allow her as minister to determine what cultural institutions and projects could be denied funding based on criteria that could include denigrating the national flag or state symbols, denying Israel’s existence as a Jewish and democratic state, or promoting Israel’s independence day as a day of mourning. Much of those criteria would affect left-leaning or Arab institutions.

The brash and polarizing Regev has had a fraught relationship with the cultural community since her appointment last year and has been accused of attempting to bring Israeli artists’ output in line with her political ideology.

Last year, Regev, a former military spokeswoman, froze funding for an Arab theater in the mixed Arab-Jewish city of Haifa over a play it staged that was inspired by the prison experience of Walid Daka, an Arab citizen of Israel who abducted, tortured and killed an Israeli soldier in 1984. Critics said the play humanized a killer and disrespected the family of the victim. Later, Regev threatened to withhold funding for a Tel Aviv cinema hosting a film festival about the Nakba, or “catastrophe,” the term Palestinians use to describe their displacement during the 1948 war that attended Israel’s creation.

She’s also tried to meddle in the playlist selection of Israel’s most popular radio music station, Galgalatz, saying they were snubbing the Mizrahi, or Middle Eastern, music that is popular with her traditional political base in favor of the mainstream pop of Ashkenazi, or European-descended, musicians.

“Regev is using all the tools at her disposal in an irresponsible way,” said Stav Shaffir, an opposition legislator. “She is using her authority to suppress art and humanities and not strengthen them.”

Speaking at Israel’s national theater Habima Wednesday night ahead of the debut performance of the musical “Evita,” the crowd greeted Regev with both applause and boos, a reflection of her divisiveness.

“I will not allow the state to fund – in the name of freedom of expression – activities that undermine the very existence of the state of Israel as a Jewish and democratic state,” Regev told the crowd in Tel Aviv, Israel’s liberal bastion. A spokeswoman for Regev did not respond to requests for comment.

Regev’s supporters say she is preserving Israel’s national dignity in the face of artists who are stretching the limits of freedom of expression. They point to performance artist Natali Cohen Vaxberg, who filmed herself defecating on an Israeli flag. She has been arrested a number of times for the act following citizen complaints.

“It’s not a crime to be proud of your country, and you are not a radical rightist for being proud of the flag,” Yoav Eliasi, a rapper with the stage name The Shadow, who is known for his hard-line views, wrote on his Facebook page. “The days where you could defecate on state symbols and get state funding for it are over.”