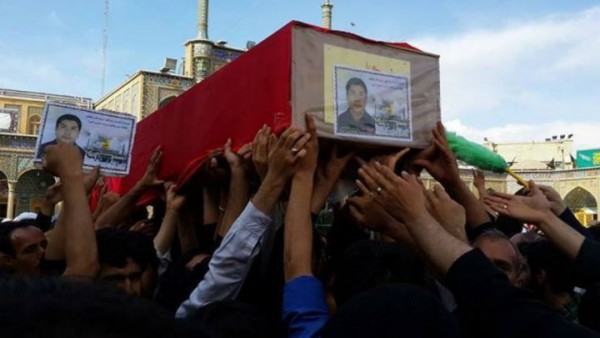 FRANCE 24 Observers | Funeral procession of an Afghan fighter in the Iranian holy city of Qom.
Share:
Iran’s powerful Revolutionary Guards has been recruiting Afghans, some by coercion, to fight in militias supporting President Bashar al-Assad’s regime in Syria, according to a Human Rights Watch report released Friday.

In the summer of 2013, Ahmad’s cousins informed him that they had received an offer from Iran’s powerful Revolutionary Guards Corp they could not refuse.

A young man from a northern Afghan province, Ahmad — who did not want his real name revealed — told FRANCE 24’s Observers that his two cousins had left their native Afghanistan for neighbouring Iran, seeking better economic prospects.

So, when Ahmad’s cousins were approached by the dreaded Iranian Revolutionary Guards (IRG) with a deal that seemed too sweet to decline, there was nothing Ahmad could do to dissuade them.

The IRG wanted to recruit the young Afghans to fight with militias supporting President Bashar al-Assad’s regime in Syria. If his cousins took up the offer, Ahmad told FRANCE 24’s Observers, the IRG would pay them 1.5 million toman [around 430 euros or $585] per month and provide six-month residency permits for all their family members. If they stayed on to fight in Syria for more than six months, their families were promised long-term residency permits.

“The offer of a residency permit for their families became one of the most important factors motivating my relatives’ decision to go to Syria,” Ahmad explained. “Whenever I tried to dissuade them, they would reply that their cause was holy and accused me of not being religious enough.”

‘Defenders of the holy shrine’

As the Syrian conflict turned increasingly sectarian in early 2013, with Shiite militias joining the fight on Assad’s side against predominantly Sunni rebels, Iran started playing the religious card in its recruitment drives.

Afghan Shiites in Iran were told they would be defending the Sayyida Zaynab mosque — a major Shiite pilgrimage site in the suburbs of Damascus — from “takfiris” or Salafi jihadists, some of whom had threatened to attack the shrine. Iran’s terminology for Shiite fighters in Syria is “the defenders of the holy shrine”.

But Iran’s recruitment of Shiite fighters in Syria has not always been voluntary. In a report released Friday, the New York-based Human Rights Watch (HRW) said the IRG has sent thousands of undocumented Afghans to fight in Syria and “a few had reported that Iranian authorities had coerced them”.

“Iran has not just offered Afghan refugees and migrants incentives to fight in Syria, but several said they were threatened with deportation back to Afghanistan unless they did,” said HRW’s emergencies director Peter Bouckaert. “Faced with this bleak choice, some of these Afghan men and boys fled Iran for Europe.”

Of the more than two dozen Afghans HRW interviewed for its latest report, one of the interviewees was a 16-year-old who said he was detained in Tehran and forced to fight in Syria.

Conflict-ridden, impoverished, and a historical proxy war battleground for the world’s super powers and regional players, Afghanistan has had more than its fair share of problems. As the Syrian war enters its sixth year, Afghans are feeling the impact of a conflict in an Arab land with which they share few cultural or linguistic ties.

The Syria-based Islamic State (IS) group has made inroads in Afghanistan and has clashed with the Taliban as well as breakaway Taliban units over the past few months. Attacks targeting Afghanistan’s religious and ethnic minority Hazara Shiite community have increased. Now Afghans on both sides of the Sunni-Shiite divide have been flocking to the battle zones of Syria and Iraq to fight a war that has nothing to do with Afghanistan.

While much has been made of foreign fighters joining jihadist rebel ranks such as the IS group, Iran’s recruitment — voluntary or coerced — of marginalised, non-citizens raises troubling issues in a conflict that has no end in sight.

In recent years, Iran has been limiting legal avenues for Afghans to claim asylum, even as conditions in Afghanistan have continued to deteriorate. Threatening Afghans with deportation unless they fight in Syria “means that many Afghans living in Iran may be entitled to refugee status, and their return to Afghanistan may amount to refoulement [against regulations],” notes the HRW report.

‘Sending them to die in Syria’

While the latest HRW report has put the international spotlight on Shiite Afghans fighting in pro-Assad militias, the issue has been widely covered in the Iranian and Afghan press over the past two years.

Funerals of Afghan migrants killed in Syria, some of them attended by Revolutionary Guards commanders, have been covered by Iranian media outlets.

While there are no official figures of the number of Afghans fighting in pro-Assad ranks, their numbers were significant enough to merit a special Afghan brigade, known as the Fatemiyoun brigade. In a November 2015 report, British daily, The Guardian, said the brigade had been upgraded to a military division, or lashkar, which is supposed to have between 10,000 to 12,000 members.

The numbers of Afghans joining pro-regime militias in Syria have also been swelled by Afghan Shiite clerics encouraging young men to protect the Sayyida Zaynab mosque, according to a number of Afghans.

Vafa, a young man from the western Afghan city of Herat who did not want to be identified, told FRANCE 24’s Observers that Shiite clerics were telling young Afghans that their families would be allowed to live in Iran if they volunteered to fight in Syria.

In May 2014, Afghan lawmakers brought up the issue in parliament following a Wall Street Journalreport that Iran was offering Afghan migrants $500 a month to fight in Syria. “This is really a sad event,” said Afghan parliamentary speaker Fazel Hadi Mosleymyar. “Afghanistan’s government has to find a solution. They take advantage of their [refugees’] poverty and send them to Syria to die.”

Responding to the Wall Street Journal report, an Iranian Foreign Ministry spokeswoman called the article “baseless” and accused the US daily of instigating tensions between Iran and Afghanistan. Iran officially maintains it is participating in the Syrian conflict in an advisory capacity. While funerals of Iranian and Afghan fighters are covered in the local press, details surrounding their deaths are never released.

According to Ahmad, who managed to keep in touch with relatives in Syria sporadically, his cousins told him they received military training in Iran before being sent to fight in Syria alongside Lebanese Hezbollah troops.

More than 30 years ago, the anti-Soviet resistance in Afghanistan attracted fighters across the Muslim world to join the jihad against the “godless Communists”. The return of the fighters to their home countries after the Soviet withdrawal sparked a global jihadist movement, the repercussions of which are still being felt across the globe. With the influx of Afghans joining the sectarian conflict in Syria, the effects of the Syrian war could endanger the very fabric of Afghan society in the years to come.