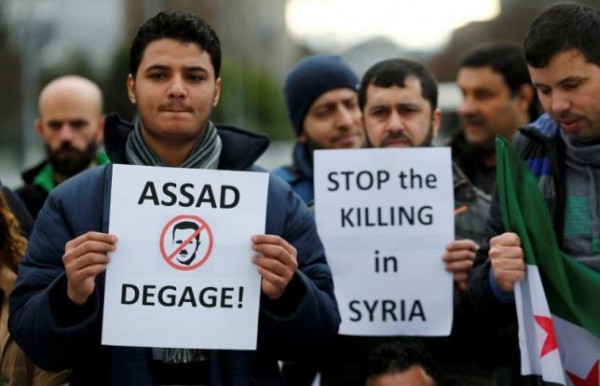 People demonstrate against the Syrian regime ahead of the start of the Syrian Peace talks outside the U.N. European headquarters in Geneva, Switzerland, January 29, 2016. Banner reads : “Assad go away”. REUTERS/Denis Balibouse
Share:

The first Syria peace talks for two years were a “complete failure” before they started on Friday, a Western diplomat said, after the United Nations announced it would press ahead with them despite an opposition boycott.

Opponents of President Bashar al-Assad said they were far more concerned with fending off a Russian-backed military onslaught, with hundreds of civilians reported to be fleeing as the Syrian army and allied militia tried to capture a suburb of Damascus and finish off rebels defending it.

U.N. envoy Staffan de Mistura has invited the Syrian government and an opposition umbrella group to Geneva for “proximity talks”, in which they would meet in separate rooms.

But so far the main opposition High Negotiations Committee (HNC) has refused to attend, insisting it wanted an end to air strikes and sieges of towns before talks can start. The boycott defies Washington, which has urged the opposition to take up the “historic opportunity” for the talks, without preconditions.

A U.N. statement said de Mistura would open the talks as scheduled on Friday by meeting the government delegation headed by Syria’s ambassador to the United Nations. Meetings with “other participants” would take place “subsequently” it said, without giving details.

The head of the Syrian government delegation, United Nations ambassador Bashar al Jaafari, arrived at the talks venue late in the afternoon but made no statement.

“It is a complete failure,” said a Western diplomat, on condition of anonymity, describing the event as a boon for Assad’s government.

“They are completely off the hook. With whom are they going to talk? If you want to engage in negotiations, you have to have a partner. It’s a wonderful occasion for the regime to show they are willing.”

If opposition members do attend “they will be telling you they are coming in their personal capacity,” the diplomat said.

On Thursday the opposition HNC, which groups both armed and political opponents of Assad and has been meeting in Riyadh this week, said it would not attend the start of talks because it had not received convincing answers to its demand for goodwill steps such as a ceasefire.

Another major force, the Kurds who control much of northeast Syria and have proven one of the few groups capable of winning territory from Islamic State, were excluded from the talks after Turkey demanded they be kept away. The Kurds say their absence means the talks are doomed to fail.

International diplomacy has so far seen only failures in a 5-year-old multi-sided ethno-sectarian civil war that has killed more than 250,000 people and driven more than 10 million from their homes while drawing in regional states and global powers.

Since the last talks collapsed in 2014, Islamic State fighters surged across Syria and Iraq declaring a “caliphate”, the United States and its European and Arab allies launched air strikes against them, and Russia joined in last year with a separate air campaign to support Assad.

Moscow’s intervention in particular has altered the balance of power on the ground, giving strong momentum to government forces and reversing months of rebel gains.

The Syrian military and allied militia are seeking to build on gains in western Syria, and have turned their focus to opposition-held suburbs southwest of Damascus.

The aim is to crush rebels in the district of Daraya to secure the nearby military airport at Mezzeh, said Rami Abdulrahman, director of the Syrian Observatory for Human Rights, which monitors the conflict with sources on the ground.

Rebels had rejected a government deadline for them to withdraw from the suburb of Mouadamiya – home to 45,000 people – by Friday, said Abu Ghiath al-Shami, spokesman for rebel group Alwiyat Seif al-Sham.

More than 500 families had fled, he said. “They are suffering a shortage of food, medicine, milk – there is no power, nothing,” he said, adding that 16 barrel bombs had been dropped on Friday.

A Syrian military source denied the use of barrel bombs, which have been widely documented in the war, and accused the opposition of exaggerating the conditions. “There has been progress by the army in the last days, some successes particularly in the Daraya area,” the source said.

Rebels say the fighting on the ground is of more concern to them than the fate of the negotiations.

Asked about the future of the talks, Shami told Reuters he was “a bit busy” dealing with the fighting.

Haitham al-Maleh, a prominent Syrian opposition politician, to Al Jazeera: “We cannot hold negotiations while the United Nations and the international community is incapable of (implementing) confidence building steps.”

“I personally believe that the negotiations in this situation are futile and will not produce anything,” he said. “We cannot hold negotiations with murderers and criminals as they cling to power.”