Israel feels the heat of criticism by U.S., EU and U.N. 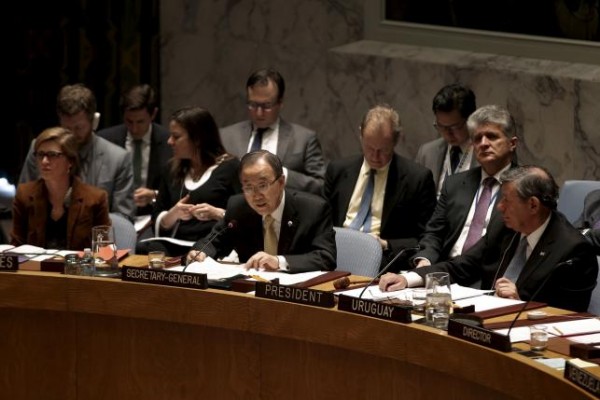 Ban also laid some of the blame for four months of stabbings and car rammings by Palestinians at Israel’s door, saying “as oppressed peoples have demonstrated throughout the ages, it is human nature to react to occupation, which often serves as a potent incubator of hate and extremism”.

Netanyahu’s response was quick and furious. Ban’s remarks “give a tailwind to terrorism”, he said, and ignore the fact “Palestinian murderers do not want to build a state”.

“The U.N. lost its neutrality and moral force a long time ago,” he added, singling Ban out for personal criticism.

While terse words between Israel and the United Nations are nothing new, Israel’s closest allies, the United States and the European Union, have publicly expressed their own frustration with the policies of Netanyahu’s right-wing government.

Speaking at a security conference last week, U.S. Ambassador to Israel Dan Shapiro questioned how equitably justice is applied in the occupied West Bank, saying: “At times there seem to be two standards of adherence to the rule of law: one for Israelis and another for Palestinians.”

That, too, drew an angry response from Netanyahu. Shapiro later said he regretted the timing of his remarks, made on the day an Israeli mother of six, stabbed to death by a Palestinian in a West Bank settlement, was buried.

The European Union’s policy of labeling products made in Israeli settlements has provoked similar anger from officials, while Sweden’s foreign minister was branded an anti-Semite after calling for an independent investigation into Israel’s efforts to quell the current wave of violence.

The criticism, particularly about the settlements, where some 550,000 Jews live in around 250 communities scattered across the West Bank and East Jerusalem, has raised Palestinian hopes that world powers might finally be minded to support a U.N. resolution condemning Israel’s policy outright.

“We are continuing our contacts with the international community… and will go to the Security Council for a resolution against the colonial settlement enterprise,” Saeb Erekat, the Palestinians’ chief negotiator, said last week.

The last attempt at such a resolution failed in 2011 after the United States vetoed it, saying it harmed the chances for peace. The feeling among Palestinian diplomats now is that the United States may be less inclined to veto given the absence of peace talks and the depth of U.S. frustration with Israel.

Israeli diplomats are also wary of that possibility.

“It’s always a risk and we are extremely attentive to it,” said Emmanuel Nahshon, the Foreign Ministry’s spokesman.

“There has indeed been a lot of criticism of Israel recently, but I don’t know whether that necessarily translates into a U.N. resolution.”

He said there had been “anti-Israeli resolutions” at the United Nations in the past, regardless of developments on the ground.

The Palestinians hope France, a permanent member of the U.N. Security Council, might sponsor such a resolution, but it is unclear whether the French have the appetite for such a course.

“If the French want to play a useful and positive role in the Middle East, they can’t stand behind an initiative that is against Israel and only antagonizes us,” said Nahshon.

Even if a resolution were to be drafted, diplomats played down its prospects. While President Barack Obama may have a fractious relationship with Netanyahu, he is unlikely to want to isolate Israel in a U.S. election year, with Democrat candidate Hillary Clinton keen to draw the Jewish vote.

Even if a resolution were to be drafted, diplomats played down its prospects. While President Barack Obama may have a fractious relationship with Netanyahu, he is unlikely to want to isolate Israel in a U.S. election year, with Democrat candidate Hillary Clinton keen to draw the Jewish vote.

“The logic might seem to be there, but when it comes to it, the United States isn’t going to let such a resolution pass,” said a European diplomat who has worked at the United Nations.