Analysis: What has the U.S. ‘leading the world from behind’ achieved? 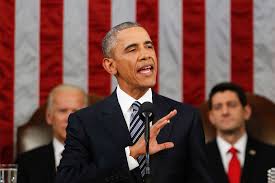 President Barack Obama’s last State of the Union address was lackluster compared to the global hype that accompanied his election to the White House seven years ago. Obama admitted that the U.S. has become more divided and begrudged under his tenure, and expressed regret for failing to bring Americans together.

However, he wasn’t sorry for a lot of things and was rigidly adamant that his views and policies are the right ones. He seemed convinced that his legacy will have him classed as a visionary who saved the United States from arrogance, condescension and war.

His opponents though have a different view. They blame him for dwarfing the United States and its global leadership, weakening its clout, and undermining its prestige. Obama’s arrogance and conceit has radically helped expand the gap and deepen U.S. divisions, they say.

History will judge him on this count. However, Obama is clearly determined for Iran to be the crown jewel of his legacy. He has closed the book on hostility with Tehran, recognized the legitimacy of the regime and the 36-year-old Iranian revolution. This was achieved through the nuclear deal, which acknowledged Tehran’s “right” to possess nuclear capabilities while postponing its ability to build nuclear weapons by 10 years, in return for lifting the sanctions on Iran and accepting for it to have a leading regional role.

However, Obama’s historical legacy is different from the legacy he leaves at the end of his term a year from now. What kind of America and the world has the Democratic president contributed to making? Will Obama leave a more difficult task for his successor than the one he inherited from Republican President George W. Bush? And more broadly, does a one-term or two-term president shape U.S. foreign policy, or is the presidency one chain of long-term strategic U.S. policymaking, which usually spans at least two decades?

Those who revere Obama, and consider him a good president that saved America, cite a number of his supposed achievements to justify their support. First of all, they say, Obama has read the mood of the U.S. public opinion well and met its demands. This included pulling away from Bush’s wars fought in retaliation of the terror attacks of 9/11. Those attacks blindsided the American people, who then associated terror to Arabs, especially Sunni Arabs.

However, the majority of Americans soon turned against Bush’s wars in Afghanistan and Iraq, especially when it turned out that the evidence for the weapons of mass destruction premise for the latter war had been falsified. Ultimately, Obama took heed and withdrew from Afghanistan and Iraq, and resisted further military entanglements abroad.

Secondly, Obama’s supporters say he protected the U.S. from major terror attacks, though some reluctantly admit Bush’s contribution to this. They attribute the elimination of Al-Qaeda leader Osama bin Laden to Obama and cite it in response to accusations of his weakness or cowardice. They say that Obama, like Bush, followed the doctrine of “we fight terrorists abroad so we don’t have to fight them in American cities.”

Third, Obama’s supporters are fond of his “leading from behind” doctrine, which they believe has kept the U.S. away from involvement in wars. They believe this has meant sharing of the burden instead of U.S. bearing it all alone. By doing so, the economic, political and military cost have been outsourced to countries that are willing. This has allowed the U.S. to exercise leadership without a cost, which is a major achievement in their eyes.

Fourth, Obama’s backers say his decision to stay away from conflicts have helped improve the economy, allowing the president to focus on internal issues and tackle unemployment. To them, the Obamacare healthcare scheme has also been a success.

Fifth, the pro-Obama camp is proud of his non-confrontational relationship with China and of his intent to appease nations that have a history of confrontation with the U.S. They believe Obama’s pivot to Asia, away from the Middle East, is wise and worthwhile. In their view, it is time to get rid of the historical bonds with the Middle East particularly as there is less U.S. need for Middle Eastern oil following the discovery of massive oil reserves in the U.S. and the collapse of oil prices to below $30 a barrel.

Sixth, the supporters of Obama’s policies perceive the relationship with Russia only from the standpoint of coordination and consultation on radical disputes or to build semi-alliances like the one in Syria. The supporters are also happy with the decision taken by the Obama administration to manage crises with Russia, including over Georgia and then Crimea, at a time when Western sanctions have been imposed on Russia. North Atlantic Treaty Organization (NATO) discourse has changed in the era of Barack Obama as well.

Seventh, Obama supporters agree with his Syria policy, including the backtracking of his red line on chemical weapons and Assad’s departure. They support his categorical rejection of getting involved five years ago when protests erupted in Syria demanding reforms, which resulted in a humanitarian catastrophe, killing 300,000 people and displacing 9 million, and turning Syria into a magnet for terrorism.

Eighth, the pro-Obama camp also has no qualms about blessing a Russia-Iran alliance with the Assad regime and Hezbollah, which Washington still classes as a terrorist group. That is as long as the U.S. can escape involvement in the Syrian quagmire, regardless of the radical change in regional and international balances of power this has caused, which is in fact desirable by some in this camp.

Ninth, the supporters of Obama’s policies have not kept up with what happened after his famous speech in Cairo, which was supposed to lead to bold policies including the determination to resolve the Arab-Israeli conflict. They did not keep up with the bid to encourage the Turkish model of Islamist democracy in Egypt, when the Muslim Brotherhood was endorsed as the “moderate” alternative after the ouster of Hosni Mubarak. Instead, they viewed all this as an achievement and part of Obama’s “leading from behind”.

Something similar happened when Muammar Qaddafi was toppled in Libya, although the U.S. was more involved there through U.S. Secretary of State Hillary Clinton and ambassador to the UN at the time, Susan Rice. This too was seen as an achievement.

Tenth, the engagement with Cuba is cited as an achievement, so is eliminating Ebola. Climate change agreement is an achievement too, supporters of Obama claim.

On the other hand, those who assign moral, political, and visionary responsibility to Obama rebut the claim the he is an advocate of peace. They cite the covert drone wars that practically fulfilled the desires of the Americans as long as there were no American bodies being flown back home and scenes of carnage caused by the U.S. In reality, Obama’s policies and drone wars did leave behind scores of victims.

Yet this is not the critics’ main argument against Obama. They believe he is a “neo-isolationist” president. The first criticism against Obama is that he tore apart harmony in America. While George W. Bush arguably created divisions, Obama deepened them, they say. Obama’s critics say Obama turned the U.S. from a superpower to a paper tiger. It is this approach, in their view, that has allowed Russia to see the U.S. as “infirm” and weak.

Obama’s critics believe his pattern of leading from behind gives a mandate to the likes of Russia and Iran, from Georgia and Syria to Yemen, Iraq, and Lebanon, at the expense of U.S. interests and values. They say that the true leader is not someone who reads moods and events well but someone visionary who protects the United States’ exceptional and leading role.

They say the cost of isolationism, the reputation of weakness and decline, and of abandoning allies will be dear for the U.S., despite all claims to the contrary. Critics also say economic recovery would have happened regardless of Obama’s policies.

There is a belief that Obama’s policies vis-à-vis Russia, Iran, Hezbollah, Assad, and China have fueled Sunni and Shiite extremism. They have allowed militias, rather than states, to take matters into their own hands, and given Iran the key to expand regionally and challenge the U.S. They have also proved the accusations against Washington of abandoning friends and allies, while making Russia a leader in the Middle East in cooperation with Iran and in conflict with Turkey.

The critics say the vengeful culture behind installing Shiite Iran as leader in the Sunni-majority Muslim world will repel Sunni partners, who are necessary in the war with ISIS, Al-Qaeda and other terror groups. This will also deepen the Sunni-Shiite strife by creating a cycle of resentment and revenge.

The Obama legacy, according to his critics, is the death of hundreds of thousands of civilians in Libya and Syria caused by half-hearted interventions or complete lack of it. In the view of the critics, refusing to intervene does not exempt the U.S. from its moral responsibility and does not befit a superpower that claims to uphold supreme values. Evading this predicament and pretending that everything is alright amid a huge humanitarian disaster, and remaining silent in the face of starvation, barrel bombs, and war crimes is moral bankruptcy, whatever the justification.

Obama’s critics are opposed to the core of his policy that claims to fight ISIS while there is a de-facto alliance with Iran-backed militias even as Obama turns a blind eye to Russian strikes on Syrian rebel groups instead of ISIS. They oppose the U.S. bowing down to Tehran’s diktats and legitimizing its violation of international resolutions, whether through its ballistic missile program or its overseas military meddling.

They say the world Obama has left behind is not safe or secure, but is a ticking time bomb.

While President Obama is still in the process of shaping his legacy but he has placed it in the hands of others. The next Iranian elections will be a test and so will be the endgame in Syria. If ISIS strikes in U.S. cities, this will also undermine Obama’s legacy.

So perhaps the proven legacy of the 44th president is that he has seen greatness as an unnecessary burden for the United States, and decided to “lead from behind” believing this best serves the U.S. interests. Was this Obama’s decision or was it part of long-term U.S. strategic thinking, which often carries contradictory elements to preserve power?

Only time will tell.