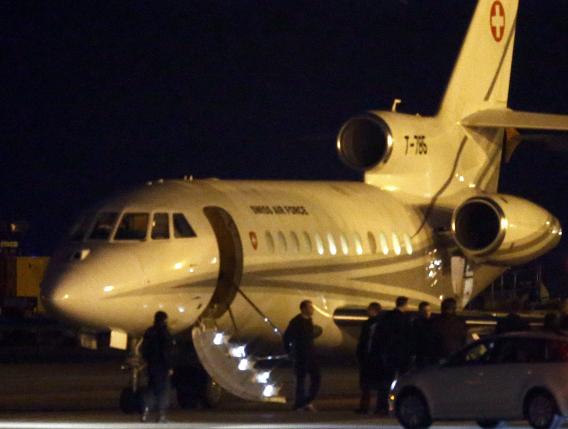 People walk off a plane carrying three Iranian-Americans, who left Tehran under a prisoner swap, after it landed at Cointrin airport in Geneva, Switzerland January 17, 2016. REUTERS/Denis Balibouse
Share:

Three Iranian-Americans left Tehran on Sunday under a prisoner swap following the lifting of most international sanctions on Iran under a deal President Barack Obama said had cut off every path for Tehran to obtain a nuclear bomb.

The Obama administration imposed the new curbs after delaying the action for more than two weeks during tense negotiations to free five American hostages, according to people familiar with the matter. Iran conducted a precision-guided ballistic missile test last October, violating a UN ban.

“This is a good day because once again we are seeing what’s possible through strong American diplomacy,” Obama said at the White House. “These things are a reminder of what we can achieve when we lead with strength and with wisdom.”

Iranian President Hassan Rouhani hailed the nuclear deal as a “golden page” in Iran’s history and said the agreement could be used as a model to resolve other regional issues.

The lifting of sanctions and the prisoner deal considerably reduce the hostility between Tehran and Washington that has shaped the Middle East since Iran’s Islamic Revolution of 1979.

A U.S. official said a Swiss plane had left carrying Jason Rezaian, the Washington Post’s Tehran bureau chief, Saeed Abedini, a pastor from Idaho and Amir Hekmati, a former Marine from Flint, Michigan, as well as some family members.

One more Iranian-American released under the same swap, Nosratollah Khosravi-Roodsari, was not aboard the aircraft. A fifth prisoner, American student Matthew Trevithick, was released separately on Saturday, a U.S. official said.

“We can confirm that our detained U.S. citizens have been released and that those who wished to depart Iran have left,” a senior U.S. administration official said.

Several Iranian-Americans held in U.S. prisons after being charged or convicted for sanctions violations have also been released, their lawyers told Reuters on Sunday.

The prisoner deal was the culmination of months of contacts, secret talks and legal maneuvering which came close to falling apart on at least one occasion.

Speaking to parliament on Sunday, Rouhani, a pragmatist elected in 2013 on promises to end Iran’s years of sanctions and isolation, said he looked forward to an economic future less dependent on oil exports.

These are nevertheless likely to jump now that the United States, European Union and U.N. have scrapped the sanctions in return for Tehran complying with the deal to curb its nuclear ambitions – ambitions that Tehran says were peaceful.

But Rouhani noted bitter opposition to the lifting of economic curbs from Israel, some members of the U.S. Congress and what he called “warmongers” in the region – an apparent reference to some of Iran’s Gulf Arab adversaries, not least Saudi Arabia.

Presenting the draft budget for the next Iranian fiscal year, which begins in March, Rouhani told parliament the deal was a “turning point” for the economy of Iran, a major oil producer which has been virtually shut out of international markets for the past five years.

He later said he expected 5 percent economic growth in the next Iranian fiscal year beginning in March and assured foreign investors of political and economic stability.

“The nuclear negotiations which succeeded by the guidance of the Supreme Leader and support of our nation, were truly a golden page in Iran’s history,” he said.

Tens of billions of dollars’ worth of Iranian assets will now be unfrozen and global companies that have been barred from doing business there will be able to exploit a market hungry for everything from automobiles to airplane parts.

In The Hague, the United States and Iran settled a longstanding claim, releasing to Tehran $400 million in funds frozen since 1981 plus $1.3 billion in interest, the State Department said. The funds were part of a trust fund once used by Iran to purchase military equipment from the United States but which was tied up for decades in litigation at the Iran-U.S. Claims Tribunal. The settlement announcement was made after Tehran released the American detainees.

America’s thaw with Iran is viewed with deep suspicion by U.S. Republicans as well as allies of Washington in the Middle East, including Israel and Saudi Arabia. U.S.-Iranian suspicion still remains deeply entrenched. Rouhani said that Iran and the U.S. would not fully restore economic ties.

Iran’s Gulf Arab adversaries were silent on news of the nuclear deal’s implementation, in what is perhaps a sign of unease at the rapprochement.

Israel’s opposition was evident in a statement from the office of Prime Minister Benjamin Netanyahu on Saturday night, which said that even after signing the nuclear deal Iran had not yet “abandoned its aspirations to acquire nuclear weapons”.

Rouhani took a swipe at Iran’s critics. “Everybody is happy except the Zionists, the warmongers who are fuelling sectarian war among the Islamic nation, and the hardliners in the U.S. congress,” he said.

The International Atomic Energy Agency ruled on Saturday that Iran had abided by last year’s agreement with six world powers to curtail its nuclear program, triggering the end of sanctions.

IAEA chief Yukiya Amano will travel to Tehran on Sunday to meet Rouhani and the head of the Atomic Energy Organisation of Iran, the IAEA said on Saturday.

Minutes after the IAEA’s ruling, the United States formally lifted banking, steel, shipping and other sanctions on Iran. The EU likewise ended all nuclear-related economic and financial sanctions against the country. Most U.N. sanctions also automatically ended.

The end of sanctions means more money and prestige for Shi’ite Muslim Iran as it becomes deeply embroiled in the sectarian conflicts of the Middle East, notably in the Syrian civil war where its allies are facing Sunni Muslim rebels.

It is also a crowning achievement for Rouhani, a pragmatic cleric who had pledged to reduce Iran’s international isolation.

Britain welcomed the deal’s implementation, as did France which said it would keep a close eye out to ensure that the deal is strictly respected. Japan said it plans to lift most of its sanctions against Iran, including a halt to fresh investments in Iranian oil and gas projects, “within a few days”.

The European Commission said it would undertake a first “technical assessment mission” in February to explore energy ties with Iran. The EU executive is particularly keen to develop Iranian energy supplies as an alternative to Russia, whose powerful role as supplier of around a third of the EU’s oil and gas has divided the bloc.