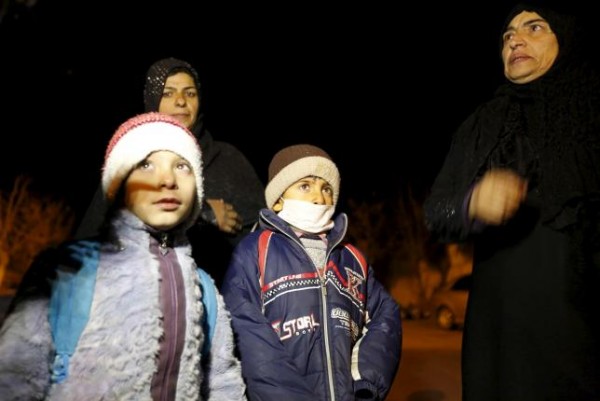 Residents who say they have received permission from the Syrian government to leave the besieged town, depart after an aid convoy entered Madaya, Syria, January 11, 2016. REUTERS/Omar Sanadiki
Share:

The U.N. children’s fund UNICEF on Friday confirmed cases of severe malnutrition among children in the besieged Syrian town of Madaya, where local relief workers reported 32 deaths of starvation in the past month.

A mobile clinic and medical team of the Syrian Arab Red Crescent was on its way to Madaya after the government approved an urgent request, and a vaccination campaign is planned next week, the World Health Organization (WHO) said.

Two convoys of aid supplies were delivered this week to the town of 42,000 affected by the months-long blockade. The U.N. said a convoy was planned to Madaya, which is besieged by pro-government forces, and two rebel-besieged villages of Foua and Kefraya in Idlib next week and that regular access was needed.

“UNICEF … can confirm that cases of severe malnutrition were found among children,” it said in a statement, after the United Nations and Red Cross had entered the town on Monday and Thursday to deliver aid for the first time since October.

UNICEF staff also witnessed the death of a severely malnourished 16-year-old boy in Madaya, while a 17-year-old boy in “life-threatening condition” and a pregnant women with obstructed labor needed evacuation, Boulierac said.

World Food Programme (WFP) spokeswoman Bettina Luescher said that the local relief committee in Madaya had provided figures on the extent of starvation, but it could not verify them.

“Our nutritionist…was saying that it is clear that the nutritional situation is very bad, the adults look very emaciated. According to a member of the relief committee 32 people have died of starvation in the last 30-day period.”

Dozens of deaths from starvation have been reported by monitoring groups, local doctors, and aid agencies from Madaya.

U.N. Secretary-General Ban Ki-moon said on Thursday Syria’s warring parties, particularly the government, were committing “atrocious acts” and condemned the use of starvation as a weapon of war in the nearly five-year-old conflict.

The United Nations says there are some 450,000 people trapped in around 15 siege locations across Syria, including in areas controlled by the government, Islamic State and other insurgent groups.

“Let us not forget that in addition to Madaya, across Syria there are 14 other Madayas and these are locations where different parties to the conflict have been using siege as a tactic of war, depriving children and innocent civilians from accessing life-saving supplies and services,” Boulierac said.