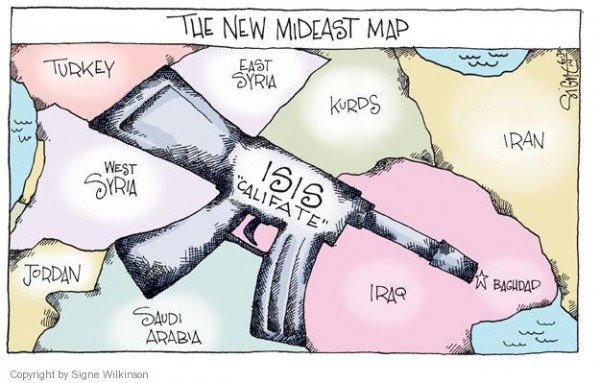 Pictures of an emaciated man from the besieged Syrian town of Madaya in the Rif Dimashq Governorate, who died after failing to exchange his car for some food, may best reflect the latest development of Syria’s debacle which welcomes 2016 with new and old baggage that threatens the Middle East with the worst.

This may not be a suitable introduction to what to expect in the Middle East in 2016, but any optimistic talk given the current situation is outright stupid; as the region, whether we like or not, is in a real, multi-faceted state of war.

Any ballistic missile launched from the Yemeni mountain hideouts of Iranian backed Houthis and former dictator Ali Abdullah Saleh targeting civilians in the towns and villages of southern Saudi Arabia proves that the GCC military intervention on the side of Yemen’s legitimate government has been more than necessary; even though, some may say, it has come a bit late.

In the meantime, in Syria, carrying out the plan hatched and imposed by Iran’s IRGC for population exchange involving the Sunni population of Damascus’ western countryside and the Shiite enclaves of Aleppo and Idlib Provinces with the military support of Iran’s subservient Iraqi, Lebanese and Afghan Shiite militias and the Russian air force, any peddling of a ‘peaceful settlement’ becomes a travesty.

As for Iraq, the role given to and played by the Shiite dominated ‘People’s Rally’ which at present forms the backbone of field armed forces claiming legitimacy, leaves no doubt that Iran now controls the political and security processes in Baghdad. The battle to ‘liberate’ the town of Ramadi by driving out ISIS, in all declared and undeclared circumstances, in addition to Baghdad taking the issue of a military Turkish presence in northern Iraq to the Arab League, are further signs that the ‘new Iraq’ created by Washington in 2003 under the pretext of non-existing arms of mass destruction is barely distinguishable from the ‘new Syria’ whose map is being drawn by Washington, Moscow and Tehran who use the war against ISIS as a pretext.

Now free of American sanctions and military pressure, Iran is now behaving like another Israel but much larger and even more ambitious and expansionist; it is hell-bent on re-drawing the borders of its neighboring countries, deciding the limits of their sovereignty, fabricating and imposing their leaders and then lecturing about ‘human rights’, defining ‘terrorism’ the way it pleases, expropriating Islam and offering its ‘services’ to world powers as a regional client.

Iran is now behaving like another Israel but much larger and even more ambitious and expansionist; it is hell-bent on re-drawing the borders of its neighboring countries, deciding the limits of their sovereignty, fabricating and imposing their leaders and then lecturing about ‘human rights’, defining ‘terrorism’ the way it pleases, expropriating Islam

The latest has been the long expected threat to Saudi Arabia after Riyadh executed a number of extremists (the vast majority of whom are Sunnis) convicted of involvement in terrorist crimes. Iran’s reaction would have been expected had it come from a country that does not carry out the death sentence against political and sectarian opposition activists; but coming from a country that ranks second (after China) in the executions’ league table and accuses Saudi Arabia and other GCC countries of aiding and abetting terrorism and al-Qaeda-style terrorism, such a reaction means that Iran is actually in a state of war with its Gulf neighbors. Indeed, it may not take the Turks and Kurds too long to begin to realize the threat of Iran’s ambitions to their own territories.

There are several question marks surrounding the future of the Middle East as we welcome in 2016; but while many argue about whether Russia’s military intervention in Syria is intended to contain Iran’s overreach or compliments its regional project which seems to enjoy American, Israeli and European approval, we are clearly witnessing two salient facts.

The first is that Russia’s political and military presence in the eastern Mediterranean is now a fact that has negative repercussions on Turkey and its regional influence. Washington’s policies and recent stances point to its deep dislike of Turkey’s President Recep Tayyip Erdogan and its efforts to weaken and undermine him in parallel with its support of Iran’s ascendancy and Kurdish secessionist endeavors. This is what one can read from NATO’s reluctant sympathy with Moscow following threats to the Turks after the Russian jet fighter incident as well as the generous and continuous American support of the Kurds which is hardly comparable with the pitiful support we have been told has been received by Syria’s moderate opposition.

The second fact is that as the U.S. presidential elections campaign gathers momentum, certain ‘specialized’ quarters begin their own campaign of – what I reckon –well-planned political and even partisan ‘leaks’. The Wall Street Journal reports about an unsuccessful coup against Syria’s Bashar Al-Assad were pretty exciting, and would surely lessen the pressure on Barack Obama in particular, as well as that on the Democrats in next November’s presidential, congressional and gubernatorial elections.

Definitely more exciting is what American investigative journalist Seymour Hersh has reported about “intelligence sharing” between the U.S. Joint Chiefs of Staff and De fence Intelligence Agency with their Russian, Israeli and German counterparts in order to keep the Syrian dictator in power ostensibly without the knowledge of the White House. One reason why such ‘info’ has been made public by Hersh may have been to exonerate Obama of GOP accusations of hesitation, betrayal of the Syrians and giving in to Moscow and Tehran.

The logical question here, besides who the main beneficiary is, must be “why now?” Given the present military situation in Syria, most of what Hersh has reported is true regardless of whether one believes in ‘conspiracy theories’ or not. But why now? After the realities on the ground– the secret about “intelligence sharing” is divulged? How is it possible to continue with fake declarations, deceitful conferences, manoeuvres and training and arming programs for two years?

In any case, the acute and defining crises the Middle East is facing at present merit realistic actions without illusions. The ‘hot spots’ like Iraq, Syria, Yemen, Libya, and of course Palestine, provide early tests of ability after intentions of all concerned have become clear.

If the Russians carry on with their ‘blitz’ in Syria in order to radically overturn the equation before the promised peace talks, Americans continue to regard Haider Al-Abadi’s government in Iraq as an avant-garde in the ‘war against terror’, and Iran swims deeper and deeper in the blood of innocent citizens of Yemen, GCC states, Iraq and the Levant through its Houthis and other local militant henchmen, the victory in the ‘war against terror’ will be costlier and will take a very long time.

The views and opinions expressed in this article are those of the authors and do not necessarily reflect the opinion of Ya Libnan.