Aid to be sent to besieged Syrian areas on Monday, 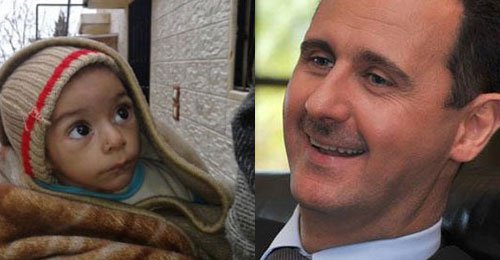 This picture shows Syrian president Bashar el-Assad-holding a starved Madaya child. Assad’s forces are besieging the village but finally after so many deaths the Syrian government allowed aid to reach the village
Share:

Humanitarian aid will be delivered to the besieged Syrian town of Madaya and two blockaded villages in the northwest on Monday according to an agreement finalised on Saturday, two sources familiar with the details said.

The United Nations said on Thursday the Syrian government had agree to allow access to the opposition-held town near the border with Lebanon, where it says there have been credible reports of people dying of starvation.

But it did not say when.

“Both date and time have been set. Aid will go to three towns on Monday morning. All at the same time,” said a source familiar with the negotiations. A second, pro-Syrian government source confirmed the details.

Madaya is besieged by pro-Syrian government forces, while the two villages in Idlib province – of al-Foua and Kefraya – are encircled by rebels fighting the Syrian government.