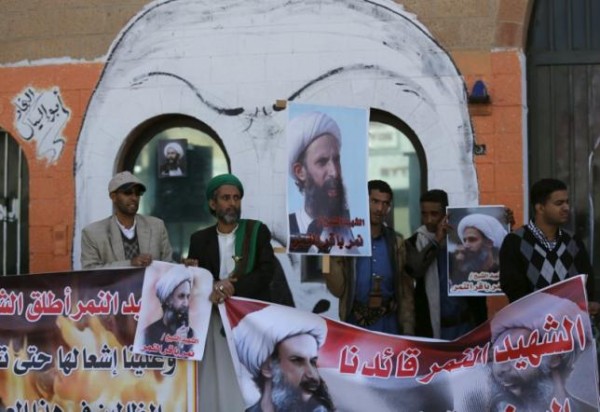 Supporters of the Iranian backed Shiite Houthi movement protest against the execution of Shi’ite Muslim cleric Nimr al-Nimr in Saudi Arabia, during a demonstration outside the Saudi embassy in Sanaa, Yemen January 7, 2016. REUTERS/Khaled Abdullah
Share:

Relations between Iran and Saudi Arabia deteriorated even further on Thursday as Tehran severed all commercial ties with Riyadh and accused Saudi jets of attacking its embassy in Yemen’s capital.

A row has been raging for days between Shi’ite Muslim power Iran and the conservative Sunni kingdom since Saudi Arabia executed cleric Nimr al-Nimr, an opponent of the ruling dynasty who demanded greater rights for the Shi’ite minority.

Saudi Arabia, Bahrain, Sudan, Djibouti and Somalia have all broken off diplomatic ties with Iran this week, the United Arab Emirates downgraded its relations and Kuwait, Qatar and Comoros recalled their envoys after the Saudi embassy in Tehran was stormed by protesters following the execution of Nimr and 46 other men.

In a cabinet meeting chaired by Iran’s President Hassan Rouhani on Thursday, Tehran banned all imports from Saudi Arabia. Saudi Arabia had announced on Monday that Riyadh was halting trade links and air traffic with the Islamic Republic.

Iran also said on Thursday that Saudi warplanes had attacked its embassy in Yemen’s capital, Sanaa, an accusation that Riyadh said it would investigate.

“Saudi Arabia is responsible for the damage to the embassy building and the injury to some of its staff,” Foreign Ministry Spokesman Hossein Jaber Ansari was quoted as saying by the state news agency, IRNA.

Residents and witnesses in Sanaa said there was no damage to the embassy building in Hadda district.

They said an air strike had hit a public square about 700 meters (yards) away from the embassy and that some stones and shrapnel had landed in the embassy’s yard.

Iran will deliver its official report on the attack to the United Nations on Thursday, Deputy Foreign Minister Hossein Amir-Abdollahian was quoted by ISNA news agency as saying.

A coalition led by Saudi Arabia has been fighting the Shi’ite, Iran-allied Houthi movement in Yemen since March 2015.

He said the coalition would investigate Iran’s accusation and that the Houthis have been using civilian facilities including abandoned embassies.

While Riyadh sees regional rival Iran as using the Houthis as a proxy to expand its influence, the Houthis deny this and say they are fighting a revolution against a corrupt government and Gulf Arab powers beholden to the West.

The deputy head of Iran’s powerful Revolutionary Guards told Saudi Arabia on Thursday it would “collapse” in coming years if it kept pursuing what he called its sectarian policies in the region.

“The policies of the Saudi regime will have a domino effect and they will be buried under the avalanche they have created,” Brigadier General Hossein Salami, was quoted as saying by the Fars news agency on the sidelines of a ceremony held in Tehran to commemorate Nimr.

Salami compared Saudi policies with those of Saddam Hussein, the Iraqi president overthrown by U.S. forces in 2003.

“The path the Saudi regime is taking is like the one Saddam took in the 1980s and 90s. He started a war with Iran, executed prominent clerics and top officials, suppressed dissidents and ended up having that miserable fate.”

Saddam, a Sunni, was hanged in 2006 after being convicted of crimes against humanity for the killing of 148 Shi’ite villagers after a failed assassination bid in 1982.

Besides import ban, the Iranian cabinet also reaffirmed a ban on pilgrims traveling to Mecca for Umrah haj.

Iran suspended all Umrah trips, which are both lucrative for Saudi Arabia and important to practicing Muslims, in April in response to an alleged sexual assault on two Iranian men by Saudi airport guards.