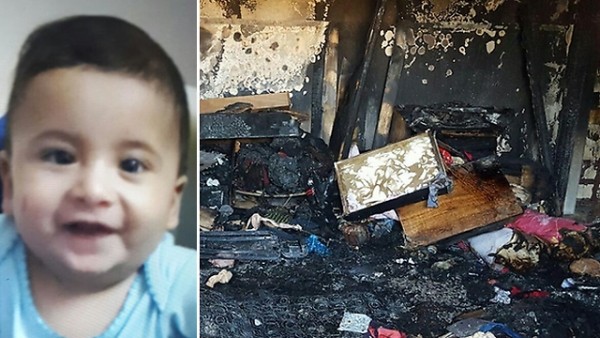 Ali Dawabsheh, the baby killed in the fire, and the damaged home
Share:

The long-awaited indictment follows months of investigations into a web of Jewish extremists operating in the West Bank. The indictment named Amiram Ben-Uliel, 21, as the main suspect in the attack. A minor was charged as an accessory. Yinon Reuveni, 20, and another minor were charged for other violence against Palestinians.

The firebombing, carried out under cover of darkness while the family slept, sparked soul-searching among Israelis rattled by the horrific attack. It was condemned across the Israeli political spectrum and Prime Minister Benjamin Netanyahu pledged “zero tolerance” in the fight to bring the assailants to justice.

Israel has authorised a series of steps, including administrative detention, to try and crack the case.

But for months, Palestinians watched angrily as the case remained unsolved, intensifying a feeling of skewed justice in the occupied territory, where suspected Palestinian militants are prosecuted under a separate system of military law that gives them few rights. The arson also touched on Palestinian fears of extremist Jewish settlers, who have attacked Palestinian property with impunity.

FRANCE 24’s Ediz Tiyansan reported from Tel Aviv that the indictments were part of a much larger investigation into anti-Arab violence and that charges had also been filed against additional suspects for their involvement in anti-Arab incidents.

He said that although the investigation remains under a gag order, the court had indicated Sunday it would file a request to have that order lifted.

“At least three of the other suspects might be sons of influential religious figures and rabbis in the orthodox communities,” Tiyansan said, referring to allegations made in the Israeli media.

Palestinians cite the Duma incident as a factor in the three-month wave of attacks and clashes roiling the region, saying they are frustrated by years of unchecked settler violence.

Israel’s Shin Bet security service says the suspects admitted to carrying out the attack, saying it was in retaliation for the killing of an Israeli a month earlier. It said all the suspects were part of a group of extremists that had carried out a series of attacks over the years and whose goal was to undermine the state.

Jewish extremists have for years vandalised or set fire to Palestinian property, as well as mosques, churches, the offices of dovish Israeli groups and even Israeli military bases. The so-called “price tag” attacks seek to exact a cost for Israeli steps seen as favoring the Palestinians.

The extremists are part of the so-called “hilltop youth,” a leaderless group of young people who set up unauthorised outposts, usually clusters of trailers, on West Bank hilltops – land the Palestinians claim for their hoped-for state. A lawyer for one of the suspects says his client gave a forced confession after interrogators deprived him of sleep and tied him upside down by his feet.