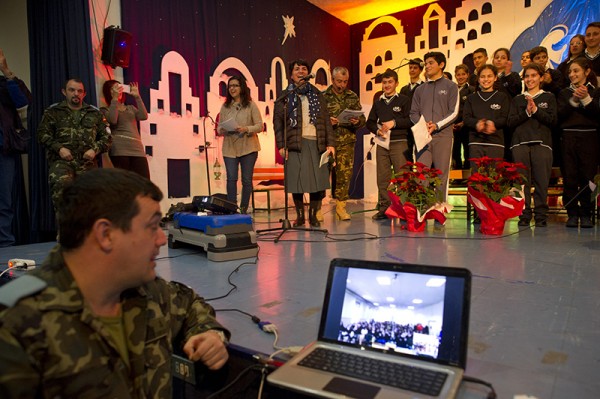 The event was arranged by Lt. Col Louis Fernando Perez Amo, Public Information officer in the UNIFIL Spanish battalion based in Marjayoun. He initiated this cultural exchange when he heard about a school in Spain that shared the same name as the Lebanese one in the little southern village in the mountains.

He organized for the students to meet each other online through Skype and sing a Christmas carol. But the enthusiasm of the children and the organizers made it a bigger event.

“First it was only a Christmas song,” Lt. Col. Amo said, “but later it started to develop as a TV program, lasting more than one hour. And the students started to ask questions about Marjayoun, Christmas and the school here.”

Sister-Labiba Moubarak, director of Sacred Heart in Marjayoun, was happy to have the opportunity to reach out to her counterparts in Spain. “We sought to establish openness with Spanish students in Granada on this day, as well as with UNIFIL’s Spanish battalion in Marjaiyoun,” she said.

The children were delighted with the unique experience. “It was a beautiful day. We communicated with Spanish students. We want to know their Christmas customs and traditions. And in return, it is an opportunity that they also know about our traditions and customs at Christmas,” Marjayoun students Marie-Helen Saeed and her sister Ghiwa said.