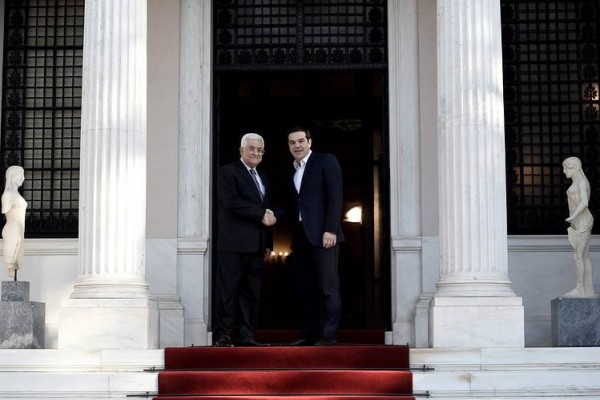 Greece’s parliament unanimously approved on Tuesday a nonbinding resolution calling on the country’s government to formally recognize Palestinian statehood, during an official three-day visit of the president of the Palestinian Authority, Mahmoud Abbas, to Athens.

House Speaker Nikos Voutsis read out a resolution calling for the recognition and handed a copy of it to Mr. Abbas.

The resolution is rather symbolic in nature and doesn’t pave the way for an official recognition of the Palestinian state.

Greek Prime Minister Alexis Tsipras declined to say when Greece could adopt the parliamentary resolution. He said that Greece will take the necessary steps to recognize Palestine “when the time is right.”

Mr. Abbas said that his national authority will start issuing passports under the name State of Palestine in 2016. At the moment all documents are issued under the name ‘The Palestinian Authority.’

“We have already changed all documents issued by ministries and public services and they now bear the name ‘State of Palestine,’” Mr. Abbas said during a news conference with Mr. Tsipras on Monday.

“We no longer accept from anybody to use the name ‘The Palestinian Authority.’”

Mr. Tsipras said that the term ‘Palestine’ will henceforth be used in all Greek public documents.